After Dinesh Karthik's dismissal in the 31st over, Ramaswamy Prasanna (56) and Mahesh combined well to take Tamil Nadu to a safer position with a 110-run sixth wicket stand before both became left-arm spinner Darekar's victims. 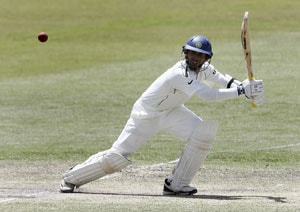 Maharashtra came up with an impressive bowling effort to restrict last year's finalist Tamil Nadu to 273 for nine in their first innings at stumps on the opening day of a third round Ranji Trophy Group B match on Saturday.

Pacers Shrikant Mundhe (3/38) and Samad Fallah (2/49) shared five wickets between them while spin trio of Akshai Darekar (2/86), Satyajit Bachhav (1/48) and Chirag Khurana (1/30) accounted for other Tamil Nadu wickets to fall on the day.

Yo Mahesh top-scored for the hosts with a 130-ball 81 during which he struck eight boundaries and three hits over the fence.

At the draw of stumps, Malolan Rangarajan was unbeaten on 50 off 85 balls and giving him company was last man R Aushik Srinivas on four.

Electing to bat, Tamil Nadu were in dire straits with the experienced opening duo of Murali Vijay and Abhinav Mukund departing inside the first 10 runs.

To add to Tamil Nadu's misery, Subramaniam Badrinath, who is eyeing a place in the India Test squad, failed to open his account as he was clean bowled by Mundhe, who picked up the first three wickets.

Baba Aprajith (23) and wicket-keeper batsman Dinesh Karthik (29) steadied the rocking Tamil Nadu ship with a 54-run fourth wicket stand before the former was caught by Bachhav off his own bowling.

After Karthik's dismissal in the 31st over, Ramaswamy Prasanna (56) and Mahesh combined well to take Tamil Nadu to a safer position with a 110-run sixth wicket stand before both became left-arm spinner Darekar's victims.

Prasanna made a neat 56 off 118 balls with the help of nine fours.

Comments
Topics mentioned in this article
Cricket Vikram Solanki Virat Kohli Wasim Jaffer Irfan Pathan Paul Valthaty Yo Mahesh Shrikant Mundhe TN
Get the latest updates on SA vs IND 2021-22, check out the Schedule and Live Score . Like us on Facebook or follow us on Twitter for more sports updates. You can also download the NDTV Cricket app for Android or iOS.