Virat Kohli was among the early voters who turned up at a polling booth in Gurgaon on Sunday morning. 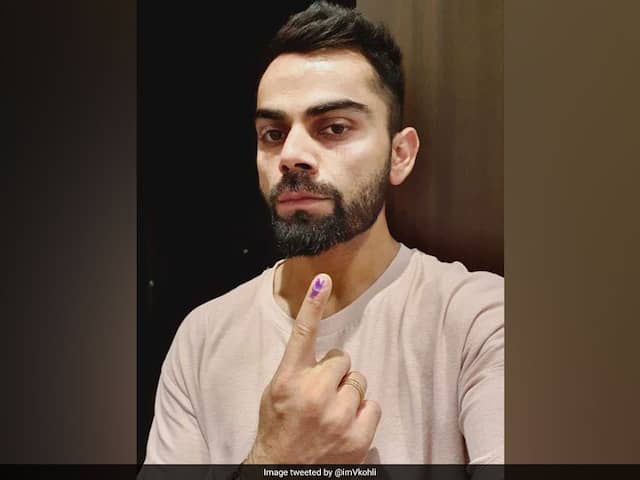 Virat Kohli, India cricket team captain, cast his vote on Sunday and was among the early voters who turned up at a polling booth in Gurgaon this morning. Wearing a casual t-shirt, the cricket star, accompanied by his brother to the polling booth and was seen standing in a long queue waiting for his turn to vote. As he was leaving, Virat Kohli signed some autographs after some fans requested him for it. The cricketer then showed his inked finger as fans took his photos and selfies with him. After casting his vote here, he told reporters: "Everyone should come and vote and I urge to all."

After casting his vote, he told reporters: "Everyone should come and vote and I urge to all."

The Team India skipper also took to Twitter and urged people to exercise their right.

Over 22 lakh voters will decide the fate of 24 candidates as Gurgaon, along with nine other Lok Sabha constituencies in Haryana, vote today in the sixth phase of the national election.

Voting is being held at 1,194 polling stations across nine assembly segments in three districts - Gurgaon, Rewari and Nuh.

The contest in this city near Delhi is mainly between BJP parliamentarian Rao Inderjit Singh and Captain Ajay Singh Yadav of the Congress.

Also in the contest are Mehmood Khan of the Jannayak Janata Party-Aam Aadmi Party alliance and Virender Rana of the Indian National Lok Dal (INLD).

In 2014, Rao Inderjit Singh defeated Zakir Hussain of the INLD by a huge margin of 2,74,722 votes. The Union Minister of State had then promised to provide rail connection and water canal to Haryana's most backward district, Nuh. But none of the promises got fulfilled, says the opposition.