Watch: Sri Lankan Spinner Leaves Fans Baffled With His Version Of 'Frog In A Blender Action'. Video Is Viral

Kevin Koththiigoda dished out another version of the "Frog in a Blender" bowling action, made famous first by South African Paul Adams. 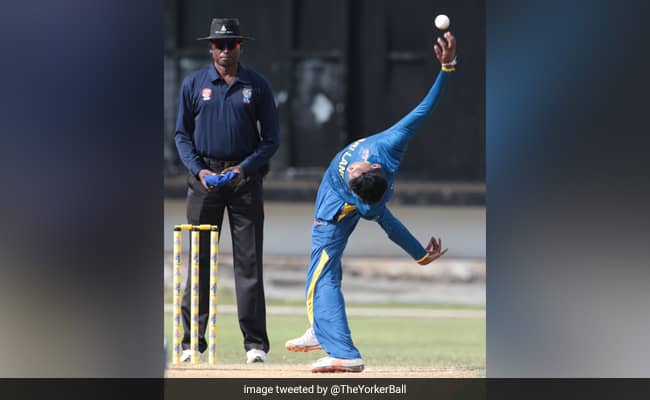 South African left-arm wrist-spinner Paul Adams had first wowed spectators in a tour match against England in 1995-96. After bewitching the English, his unique bowling action was famously dubbed as akin to a "Frog in a Blender". Fast forward 24 years and a Sri Lankan spinner, Kevin Koththiigoda, is outdoing the South African by coming up with an even whackier version of the 'Frog in a Blender' action. The 21-year-old spinner, who hails from Galle and is currently playing for the Bangla Tigers in the Abu Dhabi T10 League, left fans on Twitter baffled with his unorthodox action. Kevin Koththiigoda is not the first spinner whose action has been compared to Paul Adams. Indian bowler Shivil Kaushik caught everyone's attention after he made his IPL debut for the Gujarat Lions in 2016. Within few minutes, after delivering his first ball, Kaushik took the Internet by storm thanks to his 'Frog in a Blender' action.

Body all parts dislocated in different zones and directions just before he thru ball.. need a batman to play him and not a batsman...

I can't imagine, how can he bowl like this. #Brave

He is just 2019 version of The great Paul Adams from https://t.co/vkXhD8za3j

Incorrect. He can. It's similar to Paul Adam's action who took 134 test wickets in 45 games.

Don't think he even generated any spin. More of a physc-out

His arm ends up at mid wicket

Annoyed that it doesn't continue to show how it goes

Kevin Koththiigoda first grabbed eyeballs during the 2017 U-19 Asia Cup in Malaysia.

Koththiigoda, who hails from Galle and is a right-arm leg-spinner, was one of the members of the Sri Lankan team that beat Afghanistan by 61 runs. The unorthodox spinner took one wicket in the match.

On Sunday, in Abu Dhabi, the 21-year-old took the only wicket to fall in the Karnataka Tuskers' innings. He dismissed West Indies' Johnson Charles, ending with figures of 1/21 from his two overs.

Despite losing just one wicket, the Karnataka Tuskers could only manage 114 in their 10 overs.

In reply, the Bangla Tigers lost five wickets but overhauled the target with seven balls to spare largely thanks to Andre Fletcher's 15-ball 40 and unbeaten 28 off just nine balls from Tom Moores.

South Africa Cricket Team Paul Adams Cricket
Get the latest updates on IPL 2021, IPL Points Table , IPL Schedule 2021 , live score . Like us on Facebook or follow us on Twitter for more sports updates. You can also download the NDTV Cricket app for Android or iOS.