Bairstow's 104 off 60 deliveries, backed by 61 from fellow opener Alex Hales transformed the winner-takes-all showdown from an expected tight contest into a one-way event. 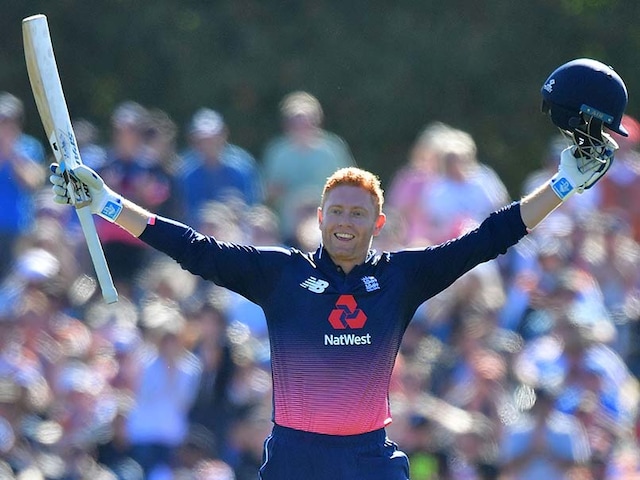 A masterful century by Jonny Bairstow saw England cruise to a seven-wicket win in the deciding one-day international against New Zealand to wrap up the series 3-2 in Christchurch on Saturday. Bairstow's 104 off 60 deliveries, backed by 61 from fellow opener Alex Hales transformed the winner-takes-all showdown from an expected tight contest into a one-way event. New Zealand, sent in to bat, struggled to 223 with the last wicket falling on the penultimate ball and England knocked off their target in 32.4 overs with Ben Stokes finishing the match with a six.

Both sides were hit with late replacements but with marked differences.

New Zealand's batting maestro Ross Taylor failed a late fitness test and was replaced by Mark Chapman who made a three-ball duck.

England lost Jason Roy to a back spasm and his replacement Hales opened with Bairstow in a 155-run stand for the first wicket.

Hales was the second wicket to fall when England were on 177 and just 47 runs short of victory.

Eoin Morgan had a short stay for eight while Ben Stokes was 26 not out at the end with Joe Root on 23.

England's domination began at the start of the day when Morgan won the toss and elected to bowl.

Midway through the 26th over, New Zealand were 93 for six while England were 192 for two at the same stage.

Bairstow toyed with the best of New Zealand's bowling stocks as he smacked nine fours and six sixes.

He eventually brought about his own downfall by belting the stumps as he stepped back to cut a wide Trent Boult delivery.

Hales was at the crease for 74 deliveries for his 61 which included nine boundaries.

After the first four ODIs, which had the series level at 2-2, the England bowling attack had the New Zealand batsmen well worked out.

Colin Munro went on the second ball he faced, caught behind off Chris Woakes for the third time in five innings and for his second consecutive duck.

Mark Wood bowled Kane Williamson for 14 before spinners Adil Rashid and Moeen Ali stepped up to decimate the middle of the New Zealand innings.

Mitchell Santner and Henry Nicholls put on 84 for the seventh wicket to give the innings some substance.

Santner, who rescued New Zealand in the first match, hit a personal-best 67 while Nicholls was out for 55.

Woakes, who claimed Santner's wicket, was the most economical of the England bowlers taking three for 32 off his 10 overs.

Comments
Topics mentioned in this article
England Cricket Team Cricket Jonny Bairstow
Get the latest Cricket news, check out the India cricket schedule, Cricket live score . Like us on Facebook or follow us on Twitter for more sports updates. You can also download the NDTV Cricket app for Android or iOS.