Under the future tours schedule which applies until 2020, New Zealand will only play two or three test series on upcoming tours. But Buchanan warned even those numbers could be reduced because New Zealand — ranked eighth among the nine test-playing nations — is not seen as a drawcard by prospective opponents. 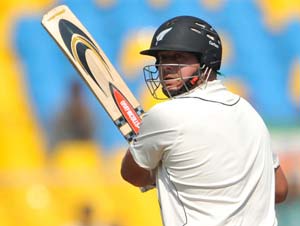 Batsman Jesse Ryder is considering a return to test cricket for New Zealand's home series against England next month, just as warnings sound that New Zealand may be shunned by other test-playing nations.

Ryder said he will meet national coach Mike Hesson on Jan. 29 to discuss his future, adding "I'm definitely not ruled out for a return for England."

The left-hander last played for New Zealand in February, 2012 before taking an indefinite break to deal with fitness and personal issues. He has since scored 558 runs in first class cricket at an average of 69.75 and 508 runs in domestic Twenty20 matches at 63.

Under the future tours schedule which applies until 2020, New Zealand will only play two or three test series on upcoming tours. But Buchanan warned even those numbers could be reduced because New Zealand - ranked eighth among the nine test-playing nations - is not seen as a drawcard by prospective opponents.

"Certainly, performances such as this (in South Africa) and what we have experienced in recent times are not going to enhance our reputation as a test-playing nation," he said.

"Any major changes to be made (to the future tours program) require a vote at the ICC and I would suspect that's not going to change too much. But I would suspect our capacity to play longer test series or longer tours, in other words more games, is somewhat impacted."

He felt his time away from international cricket had helped him improve his technique and consistency.

"I think I'll be fine. I've had a good 11 months off working through a lot of stuff regarding that sort of stuff," he said.

Former captain Ross Taylor may also return to the New Zealand lineup for the England series after missing the South African tour. Taylor withdrew from the New Zealand team that toured South Africa after being sacked by Hesson and replaced by Brendon McCullum.

New Zealand was also missing leading seam bowler Tim Southee and veteran all-rounder Daniel Vettori for the South African tests, in which it was twice beaten by more than an innings. In the first test at Cape Town it was bowled out in its first innings for only 45, its third-lowest test score.

Comments made by McCullum after the second test defeat at Port Elizabeth are being interpreted as suggesting Taylor's return might not be as straight-forward as first thought.

"There's going to have to be a process worked through to ensure the integration back into the team is smooth and everyone's got the best interests of the team at heart," McCullum said.

Comments
Topics mentioned in this article
Cricket Daniel Vettori Brendon McCullum Jesse Ryder New Zealand Cricket Team Michael James Hesson JM Buchanan
Get the latest updates on ICC T20 Worldcup 2022 and CWG 2022 check out the Schedule, Live Score and Medals Tally. Like us on Facebook or follow us on Twitter for more sports updates. You can also download the NDTV Cricket app for Android or iOS.