Javed Miandad said that despite the players getting the best possible facilities and support they were just not up to the mark. 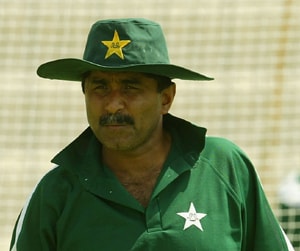 Showing concern after the team's thrashing against Sri Lanka, national sporting legends Javed Miandad and Abdul Qadir have said that there is a drastic need to change the mindset in Pakistan cricket for it to move forward.

"It is no use blaming and cribbing all the time over the performance of the current lot of players. Nothing is going to change but the present bunch is just not consistent enough or hungry enough for runs like it was in our days," former captain, Javed Miandad told PTI.

The former Pakistani coach said that despite the players getting the best possible facilities and support they were just not up to the mark.

"In our days batsmen worked hard themselves on their game and there was consistency in performances. Nowadays that consistency is lacking in the team. Changing Misbah-ul-Haq as captain will make no difference at all," he said.

He said that Pakistan players need a different approach to training than the the rest of the cricketing world.

"When I say mindset I mean we need to take decisions according to our own peculiar cricket culture and environment. We are achieving nothing by blindly following others and sending a 10-man support staff to Sri Lanka," Miandad added.

He pointed out that in Pakistan players have the capacity to learn more through practical tips rather than through laptop coaching.

"These players you need to take them out into the nets for hours and fine them. They just don't have the capacity to stay long at the crease either in Tests or ODIs," Miandad stated.

He said unfortunately even in the cricket board no one was willing to stand up to the chairman and tell him what needs to be done. "They just do what the chairman says. One chairman feels a foreign coach is good and that is done without any accountability for the results achieved."

He said moves to get back Muhammad Aamir into the national team were not right and would send out the wrong message to other players.

"Once a player has been involved in corruption he has no right to be playing for Pakistan again. That is what I say we need to change our mindset."

Former leg-spinner Qadir has no doubt that the recent defeats in Sri Lanka indicated there was a culture of like and dislike in the team.

"Unfortunately even in the cricket board we don't have people who understand the game or are willing to take unbiased decisions and they are also responsible for the team's poor showings."

Comments
Topics mentioned in this article
Pakistan Cricket Team Javed Miandad Abdul Qadir Cricket
Get the latest updates on IND vs NZ 2021, check out the Schedule and Live Score . Like us on Facebook or follow us on Twitter for more sports updates. You can also download the NDTV Cricket app for Android or iOS.