In his written reply filed before the court, Sreesanth questioned the jurisdiction of the special cell of Delhi police in probing this case, saying the "lopsided" probe was "motivated and malicious." 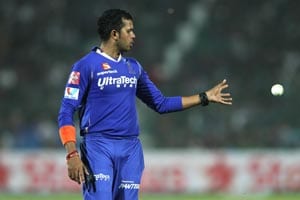 Suspended cricketer S Sreesanth on Monday opposed in a court here the plea of Delhi Police seeking cancellation of bail granted to him in IPL spot-fixing scandal case, saying that the allegations levelled against him were "completely non-existent" and it does not disclose his involvement with the alleged organised crime syndicate.

In his written reply filed before the court, Sreesanth also questioned the jurisdiction of the special cell of Delhi police in probing this case, saying the "lopsided" probe was "motivated and malicious."

He also claimed the materials sought to be relied on by police seeking cancellation of his bail were "flimsy" and there were no allegations that he had communicated with any alleged bookie or members of the purported crime syndicate.

He alleged the cricket matches, which were claimed to be fixed, were played in Mohali while he was arrested by Delhi police from Mumbai.

Sreesanth also said although Mumbai Police has lodged a separate case in this matter, he was not named as an accused there.

"In these circumstances, the unilateral and lopsided investigation undertaken by special cell, which by all accounts is motivated and malicious, has been rendered suspect and wholly without jurisdiction," he submitted in his reply filed before Additional Sessions Judge Dharmesh Sharma.

Sreesanth said he was granted bail in the case on June 10 by a court which had observed there was no material to connect him with any organised crime syndicate or his involvement in any continuing unlawful activity as defined in section 2 (d) of Maharashtra Control of Organised Crime Act (MCOCA).

"The prosecution, in its application for cancellation qua the present respondent (Sreesanth), failed to highlight any specific ground on the basis of which they sought to assail the order dated June 10, 2013 granting bail or point toward infirmity in the reasoning adopted by the judge in that order...," he said.

The police had filed an application seeking cancellation of bail granted to Sreesanth and 20 others, including suspended cricketer Ankeet Chavan, in the case.

Besides Sreesanth, four other accused, including Chavan, also filed their replies to the plea by the police seeking cancellation of the bail granted to them. The court has fixed the matter for hearing on October 25.

Sreesanth, in his reply, claimed "the allegations and supportive evidence against the respondent S (Sreesanth) are completely non-existent and disclose no direct or indirect involvement with any crime syndicate."

"This assumes significance in the light of the facts that the material collected and sought to be relied upon against S Sreesanth is extremely flimsy and in contradistinction to evidence against Ajit Chandila (another suspended cricketer and co-accused)," he said.

He also claimed the plea of police was not sustainable since "in the garb of this application, an attempt is being made to have the order on bail recalled, which is legally impermissible."

"It is a settled principle that a co-ordinate bench cannot overturn the order passed by another bench exercising equal jurisdiction. It is a matter of record that no challenge has been laid to any superior court by the prosecution in respect of the impugned order. Resultantly, the very tenability of the application under reply has become questionable," he alleged.

Comments
Topics mentioned in this article
Rajasthan Royals Ankeet Chavan Sreesanth Cricket
Get the latest updates on ICC T20 Worldcup 2022 and CWG 2022 check out the Schedule, Live Score and Medals Tally. Like us on Facebook or follow us on Twitter for more sports updates. You can also download the NDTV Cricket app for Android or iOS.