Former Pakistan captain Inzamam-ul-Haq has welcomed the resumption of bilateral cricket ties with India and called on the arch-rivals to reciprocate soon. 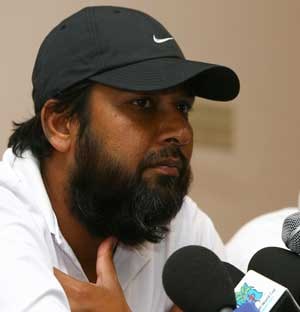 Former Pakistan captain Inzamam-ul-Haq has welcomed the resumption of bilateral cricket ties with India and called on the arch-rivals to reciprocate soon.

"I am really happy that this positive development has taken place because it is important that Pakistan and India play bilateral series against each other on a regular basis," he said in an interview.

Inzamam, who played 120 Tests and 378 one-dayers before retiring in 2007, said he had always given a lot of importance to matches against India.

"There is always great significance playing against India and it is always special and a treat for people in both countries.

"It is good we will soon resume bilateral ties and for this I think the Pakistan Cricket Board deserves a lot of credit for making this happen," Inzamam said.

The former captain also felt Indo-Pak matches deserve to be given special status.

"I would love to see a full Test series between the two countries soon and given iconic status. We need to dedicate a trophy in the name of two iconic cricketers of both countries so that there is more interest generated among the people," he said.

"Sadly there have been frequent breaks in bilateral series between the two countries but I hope that this time this will last and I would urge India to also tour Pakistan and play a full Test series," Inzamam said.

Inzamam said some of the best memories of his long career were of matches against India.Â Â Â Â  Â

"The 2005 Test tour to India was special as I captained and we won at Bangalore and it was a great tour for us and even winning against India at Lahore in 2004 was a memorable day for me. Tests with India always produce some great finishes," he noted.

Inzamam said the resumption of bilateral ties would help foster better relations between the two countries.

He also welcomed the PCB's move to organise the Pakistan Premier League and hoped that cricketers from other countries like Sri Lanka, Bangladesh, South Africa would come to play in the event.

Comments
Topics mentioned in this article
Cricket Stuart Broad Mohammad Asif Zaheer Abbas India Cricket Team Pakistan Cricket Team Inzamam-ul-Haq
Get the latest updates on IPL 2020, check out the IPL Schedule for 2020 and Indian Premier League (IPL) Cricket live score . Like us on Facebook or follow us on Twitter for more sports updates. You can also download the NDTV Cricket app for Android or iOS.