Alam said that Whatmore carried the additional job responsibility of being a batting coach in his contract. 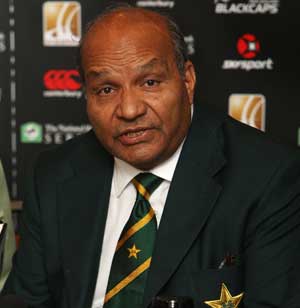 "Coaching is a thankless job I know from experience. But I think Whatmore has worked very hard with our team and he has done what he feels is right," Alam said while defending PCB decision to appoint Whatmore as head coach in March last year.

Alam also said that Whatmore carried the additional job responsibility of being a batting coach in his contract.

"Pakistan's batting has struggled because at the end of the day it is the individual who has to work hard on his game and apply himself. A coach can only guide him and be good at man-management which Whatmore has done," he said.

Alam headed the coaching commitee which recommended the name of Whatmore for the coaching job initially in 2011.

"Cricket has changed a lot but the basics of being a quality batsman remain the same, personal dedicationÂ  and application and the passion to succeed," he said.

The former Test captain also confirmed that the board would soon appoint a batting coach but still had to decide whether he could be a local or foreigner.

Asked about criticism aimed at him that he played an influential role in every decision made in the board, Alam insisted he never interfered in anyone's work.

"I only give my opinion when asked for it but at the end of the day decisions are taken collectively and finally approved by the Chairman. The impression is not right that Whatmore's appointment was solely on my suggestion."

Comments
Topics mentioned in this article
Davenell Frederick Whatmore Cricket
Get the latest updates on ICC T20 Worldcup 2022 and CWG 2022 check out the Schedule, Live Score and Medals Tally. Like us on Facebook or follow us on Twitter for more sports updates. You can also download the NDTV Cricket app for Android or iOS.