The International Cricket Council will award 12 points for every match won during the second World Test Championship cycle. 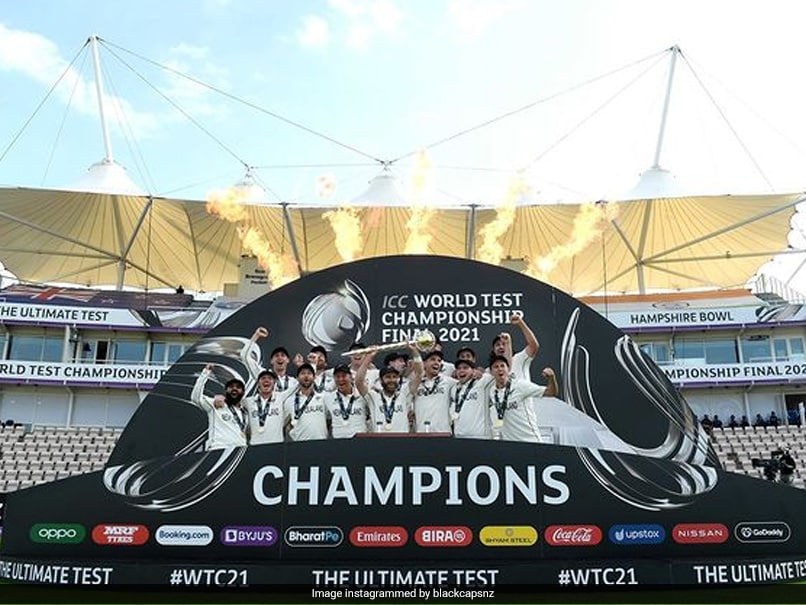 New Zealand were the winners of the inaugural World Test Championship.© Instagram

The International Cricket Council (ICC) will award standardised 12 points for every match won during the second World Test Championships cycle which kicks off with the five-match series between India and England in August. Teams will get six points in case of a tie and four points if the match ends in a draw. That there would be changes to the points system was first declared by ICC interim CEO Geoff Allardice during a media interaction earlier this month.

"Teams will be ranked on the percentage of available points they won from the matches they have played."

The changes in the points system will have to be ratified by the ICC chief executives committee in the coming weeks.

"The aim was to try and simplify the points system and to allow teams to be meaningfully compared on the table at any point, though they may have played differing numbers of matches and series," the Board member added.

Apart from the India-England series, the Ashes later this year will be the only other five-match affair in the second cycle which will end in June 2023.

Australia's tour of India next year is the only four-Test series in the upcoming cycle.

The nine Test teams will play a total of six series: three home and three away just like the previous edition.

In the inaugural edition, which New Zealand won after defeating India in the final earlier this month, the ICC had changed the qualification criteria for the World Test Championship from maximum points earned to percentage points earned from the matches contested after many scheduled series were cancelled due to COVID-19.

During the last cycle, the value for each series was 120 points where a two-match India-Bangladesh series had 60 points for a win while a four-match India-Australia Test series had 30 points in the store per victory.

"England will play the most Tests (21) in WTC-2 followed by India (19), Australia (18) and South Africa (15). The inaugural WTC winners New Zealand will play only 13 matches, similar to that of West Indies and Sri Lanka, but one less than Pakistan (14)," ''ESPNcricinfo'' reported.

Comments
Topics mentioned in this article
International Cricket Council World Test Championship 2021 Cricket
Get the latest updates on SA vs IND 2021-22, check out the Schedule and Live Score . Like us on Facebook or follow us on Twitter for more sports updates. You can also download the NDTV Cricket app for Android or iOS.