New Zealand became the No.1 ranked Test team for the first time in history after their 2-0 clean sweep of Pakistan at home. 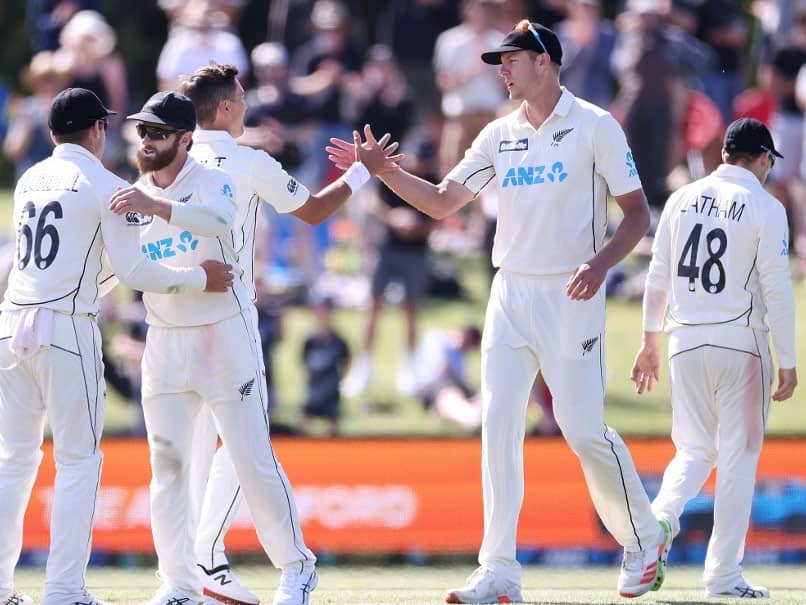 New Zealand beat Pakistan by an innings and 176 runs in the second Test in Christchurch.© AFP

Captain Kane Williamson had no trouble Wednesday pinpointing the moment that laid the foundation for New Zealand to become the world's number one ranked Test cricket team for the first time. The Black Caps were confirmed in the top spot after a comprehensive victory over Pakistan by an innings and 176 runs in the second Test in Christchurch to sweep the two-Test series. It meant New Zealand have won six consecutive Tests for the first time, extending their unbeaten home run to 17 and keeping alive their hopes of reaching the World Test Championship final in June.

It is a far cry from eight years ago, when New Zealand's cricket reputation was in tatters after they were rolled for 45 in the first innings against South Africa in Cape Town.

Current Black Caps BJ Watling and Trent Boult, who also played in that innings, made nought and one respectively.

From that embarrassment came the realisation that things had to change, starting with the culture within the team.

The days of cliques and senior players ignoring younger squad members are over and, as one former Black Cap told AFP, stars are no longer faking injury to avoid training sessions.

"Under Brendon and Hess there were some drastic changes in terms of the culture and that started things off," Williamson said of then captain Brendon McCullum and coach Mike Hesson.

Williamson said that development has continued through to the current squad and the captain highlighted the emergence of Kyle Jamieson, who took a man-of-the-match 11 wickets, and Daryl Mitchell, who scored his maiden Test century in the Christchurch Test.

"When you see some of the younger guys come in, like Daryl Mitchell and Kyle Jamieson, especially in this game, there were some outstanding contributions, but it's more the attitude they brought that is most satisfying."

McCullum, who captained the side in the disastrous South African Test and on Wednesday presented Williamson with the trophy for winning the Pakistan series, said the players knew change was necessary after the South Africa debacle.

"It was essential to all of us that we wanted the public support and the best way to go about that is to make sure you're out there and trying to represent New Zealand with everything you've got," he said.

After being humbled in South Africa, losing both Tests by an innings, New Zealand drew six and lost two of their next eight Tests before ending 2013 with back-to-back wins over the West Indies and improving steadily from there.

Jamieson said he was impressed by the inclusiveness when he came into the squad, with veterans Tim Southee and Trent Boult keen to take him under their wing.

"I didn't have to bide my time in a corner," he said. A few overs into Pakistan's second innings in the second Test, Boult took himself off new-ball duties, telling Williamson he felt conditions better suited Jamieson.

How long New Zealand's reign at the top will last depends on the outcome of the current four-Test series between Australia and India, which is locked at 1-1. Any of the three sides could be number one at the end of it.

Williamson, who recently became a father for the first time, said he would keep an eye on the Australian Tests, if baby duties allowed.

"Perhaps when feeding my baby girl or changing some nappies... but I won't be watching all of it," he said.

Trent Boult BJ Watling Cricket
Get the latest updates on India vs England Series, India vs England , live score and IPL 2021 Auction . Like us on Facebook or follow us on Twitter for more sports updates. You can also download the NDTV Cricket app for Android or iOS.