The 20-year-old, whose name was suppressed, was convicted after pleading guilty to one charge of assault and will reappear in the Christchurch District Court on June 5, the Christchurch Press reported. 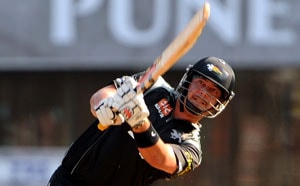 A New Zealand man has pleaded guilty to assaulting cricketer Jesse Ryder during an altercation outside a bar in the South Island city of Christchurch last month, reports said on Tuesday.

The 20-year-old, whose name was suppressed, was convicted after pleading guilty to one charge of assault and will reappear in the Christchurch District Court on June 5, the Christchurch Press reported.

It said a second man, 37, the convicted man's uncle, elected to contest charges of assaulting and injuring Ryder and planned to take the case to trial.

His lawyer, Jonathan Eaton, said the dispute erupted after Ryder had a drink with the men then left the bar without buying a round in return.

"It was all over in seconds, where it is alleged there was one kick at the shoulder... a breaking up of that incident and then my client then alleged to have delivered a single punch which caused Mr. Ryder to fall to the ground," he said.

"He hit his head, causing a severe concussion. He swallowed vomit, which is the reason he had lung issues during the course of his treatment."

Police initially reported that Ryder was rushed to hospital in a critical condition and put into an induced coma suffering from a fractured skull and internal injuries, including a collapsed lung.

The batsman was released after six days in hospital and earlier this month tweeted that he was back at the gym.

He has told police he has no recollection of the attack, which prevented him from taking up a lucrative Indian Premier League (IPL) contract.

Comments
Topics mentioned in this article
Cricket Jesse Ryder New Zealand Cricket Team AMI Stadium, Christchurch Pakistan Cricket Team
Get the latest Cricket news, check out the India cricket schedule, Cricket live score . Like us on Facebook or follow us on Twitter for more sports updates. You can also download the NDTV Cricket app for Android or iOS.