New Zealand fast bowler Mark Gillespie has been ruled out of New Zealand's Test series against West Indies due to an ongoing ankle problem, further depleting a squad already hit by injuries. 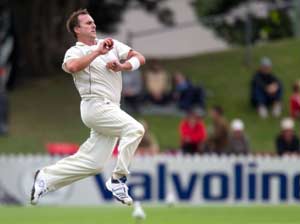 New Zealand fast bowler Mark Gillespie has been ruled out of New Zealand's Test series against West Indies due to an ongoing ankle problem, further depleting a squad already hit by injuries.

Captain Ross Taylor hurt his shoulder during the first Twenty20 in Florida on Saturday and is in doubt for the rest of the tour, while Jacob Oram (knee) and Ronnie Hira (dislocated finger) have also been sidelined so far on the trip.

Gillespie, 32, was New Zealand's leading wicket-taker during the Test series against South Africa in March, in what were his first international appearances in three years. Despite his success, Gillespie missed out on a national contract last month and has been battling ankle trouble, which the national selection manager Kim Littlejohn said had ruled him out of the Caribbean tour.

"Mark unfortunately has had to withdraw from the upcoming Test series against the West Indies having not responded to treatment in time to be fully fit," Littlejohn said. "As a precautionary measure, Mark feels that it would be the right decision to stay in Wellington to continue working on his rehabilitation."

No decision has been made on who will replace Gillespie, although one option would be to retain Tim Southee, who is in the squad for the one-day internationals but was left out of the Test group. The absence of Gillespie will boost Neil Wagner's chances of making his Test debut, while his fellow left-armer Trent Boult will also come into calculations to join Chris Martin and Doug Bracewell in the pace line-up.

New Zealand lost the two Twenty20s in Lauderhill on the weekend, and are now preparing for a five-match ODI series that begins in Jamaica on Thursday. The two Tests, in Antigua and Jamaica, run from July 25 to August 6.

Comments
Topics mentioned in this article
Cricket Gary Kirsten Ravi Rampaul MS Dhoni Bangladesh Cricket Team Jacob Oram Mark Gillespie Pakistan Cricket Team New Zealand Cricket Team Ross Taylor
Get the latest updates on SA vs IND 2021-22, check out the Schedule and Live Score . Like us on Facebook or follow us on Twitter for more sports updates. You can also download the NDTV Cricket app for Android or iOS.