Gibbs to play for Scorchers in Big Bash 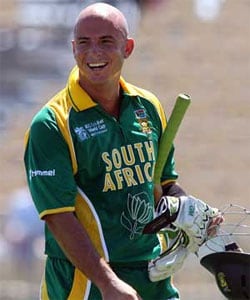 Gibbs is one of the most experienced batsmen in the history of T20 cricket, playing 23 international matches for South Africa and 113 domestic T20 games across four continents.

The Scorchers are expecting Gibbs, with a strike rate of just over 125 runs per 100 balls, to give them a boost at the top of the batting order.

"When recruiting international players you need to make sure that these players bring outstanding qualities and add value to your set-up, and I firmly believe in Herschelle we have exactly that," Perth Scorchers head coach and former South Africa coach Mickey Arthur said.

"I have known Herschelle for many years and have seen him destroy some of the best attacks in world cricket.

"I am looking forward to seeing him take to the Big Bash League in a similar manner and I'm sure the Perth Scorchers fans will really warm to him."

The Big Bash T20 tournament runs from December 30 to February 5.

Comments
Topics mentioned in this article
Cricket Lancelot Richard Gibbs Herschelle Gibbs
Get the latest updates on IND vs NZ 2021, check out the Schedule and Live Score . Like us on Facebook or follow us on Twitter for more sports updates. You can also download the NDTV Cricket app for Android or iOS.