Sporting Cricket Club won the GG Dutt Memorial cricket tournament by virtue of the spin of the coin after rain ruled out play during the final against Food Corporation of India. 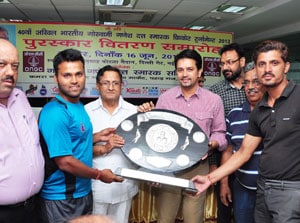 Sporting Cricket club went one better than last year to win the 40th All India Goswami Ganesh Cricket Tournament 2013 trophy in a rain interrupted final played at the Feroz Shah Kotla on Sunday.

Food Corporation of India skipper Paras Dogra won the toss and opted to field. Boosted by Naratba Bist's 68 from 99 balls that included 5 fours and 1 six, Sporting amassed a total of 190/5 in 35.5 overs when rain brought an end to play.

By the afternoon the umpires decided that further play would not be possible. The committee members decided that the spin of the coin would determine the winner. Chief guest Anurag Thakur spinned the coin and Sporting Club won the match by virtue of winning the coin flip.

Comments
Topics mentioned in this article
Cricket BCCI Sumit Narwal Paras Dogra Amol Anil Muzumdar
Get the latest updates on IPL Auction 2023 and check out  IPL 2023 and Live Cricket Score. Like us on Facebook or follow us on Twitter for more sports updates. You can also download the NDTV Cricket app for Android or iOS.