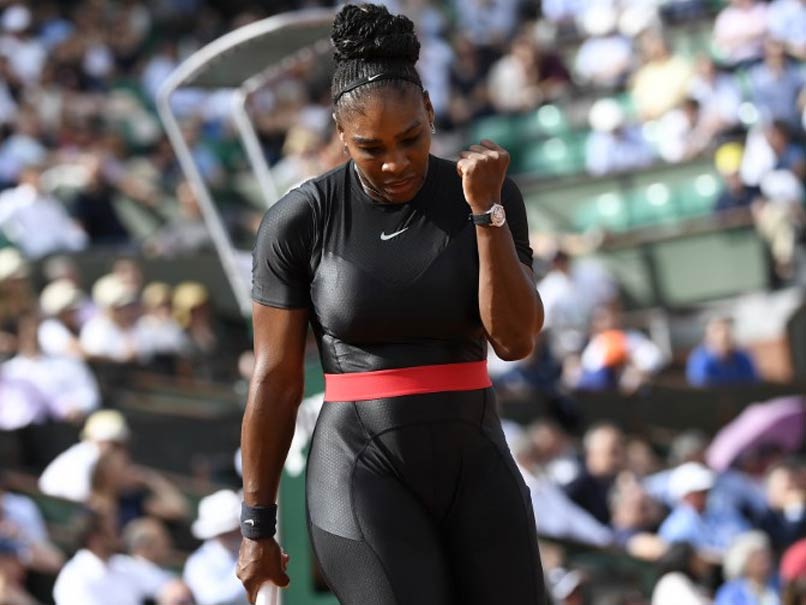 Serena Williams made a winning return to Grand Slam tennis which was as memorable as her body-hugging black catsuit when she reached the Roland Garros second round on Tuesday. The 36-year-old downed Kristyna Pliskova of the Czech Republic 7-6 (7/4), 6-4 to register her first victory at the majors since her 2017 Australian Open triumph. "I missed Roland Garros so much, I missed the battle," Serena, the 2002, 2013 and 2015 champion in Paris, said after playing her first clay court match since finishing runner-up to Garbine Muguruza in the 2016 final on the same Philippe Chatrier Court.

"I couldn't play last year. I had a baby but I am so happy to be back.

"It's been two years since I played here. It wasn't easy but I have been training really hard. I feel good and just so happy to be back here."

Serena, the winner of an Open era record 23 Grand Slam titles, had arrived at Roland Garros with just four matches under her belt in 2018.

The last time she had been spotted on a court was in a first-round loss to Naomi Osaka in Miami in March.

Having been off the tour to give birth to daughter Alexis Olympia Ohanian in September, many in the sport wondered if Serena would still be a contender at the majors especially with her ranking at 451.

However, she gave a stinging response to the doubters on Tuesday even if her win over the 70th-ranked Pliskova tested the American.

Arriving on Philippe Chatrier Court in a black catsuit, offset with a pinkish-red waistband, Serena saved a break point in the 12th game to send the opener into a tiebreak.

Serena then trailed 0/3 before eventually taking the set when Pliskova, who had never won a match at the tournament in three previous visits, put a forehand wide.

The three-time champion fell 0-2 behind in the second set and was forced to retrieve another break to level at 4-4.

As she served for the match, she slipped into the net, righting herself sporting an embarrassed smile.

She saved three break points in an eight-minute-plus 10th game before taking victory, setting up a second-round clash with Australia's Ashleigh Barty.

The only consolation for Pliskova, the twin sister of world number six Karolina, was finishing with 15 aces, the most hit against Serena since such records began to be kept in 2008.

Comments
Topics mentioned in this article
Serena Williams Tennis Cricket
Get the latest updates on ICC T20 Worldcup 2022, check out the Schedule and Live Score. Like us on Facebook or follow us on Twitter for more sports updates. You can also download the NDTV Cricket app for Android or iOS.