'Even my daughter won't believe that pace scares Sachin'

Former Indian skipper Sourav Ganguly on Saturday, made light of former Pakistani speedster Shoaib Akhtar's claim in his autobiography that Sachin Tendulkar was uncomfortable against his pace in the Faisalabad Test in 2006. 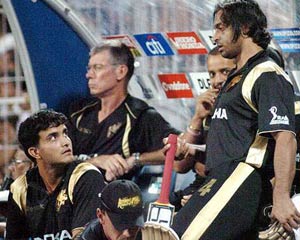 Former Indian skipper Sourav Ganguly on Saturday, made light of former Pakistani speedster Shoaib Akhtar's claim in his autobiography that Sachin Tendulkar was uncomfortable against his pace in the Faisalabad Test in 2006.

He said the controversy surrounding Shoaib's autobiography "Controversially Yours" has not come as a surprise as it has happened before with ex-cricketers penning their books with misleading anecdotes.

"I have experienced all this before. It is not just Shoaib Akhtar or Shahid Afridi. There were also Andrew Flintoff, Matthew Hayden and Adam Gilchrist. You find all these things appearing in a book. That is why I have not written a book yet," Ganguly quipped.

Hayden in his book 'Standing My Ground' had said that Ganguly and Harbhajan chickened out after having a look at the grassy Nagpur strip during Australia's tour of 2004.

While in his book 'Being Freddie, my story so far', Flintoff had portrayed Ganguly as lazy and selfish and behaved like royalty. Ganguly and Flintoff had played together for English county team Lancashire.

Ganguly said he was surprised and disappointed at the way these books were written.

"Write about good things. Write about India-Pakistan series in 2004. Shoaib Akhtar and Shahid Afridi were part of the team. It was such a fantastic tour," he added.

India had won both Tests and One-Day matches for the first time on Pakistan soil, during the bi-lateral series.

Comments
Topics mentioned in this article
Cricket Sachin Ramesh Tendulkar Sourav Ganguly Shoaib Akhtar
Get the latest updates on India vs Australia and check out  Schedule, Results and Live Score. Like us on Facebook or follow us on Twitter for more sports updates. You can also download the NDTV Cricket app for Android or iOS.