England lost a close match to Sri Lanka in the fourth ODI as Jos Buttler rallied to score 121 runs off just 74 balls after England were restricted to 111 for five chasing a near-record 301 for victory. The series is now tied 2-2.

England captain Alastair Cook said Jos Buttler didn't deserve to be on the losing side after his stunning century so nearly led to a remarkable win over Sri Lanka. 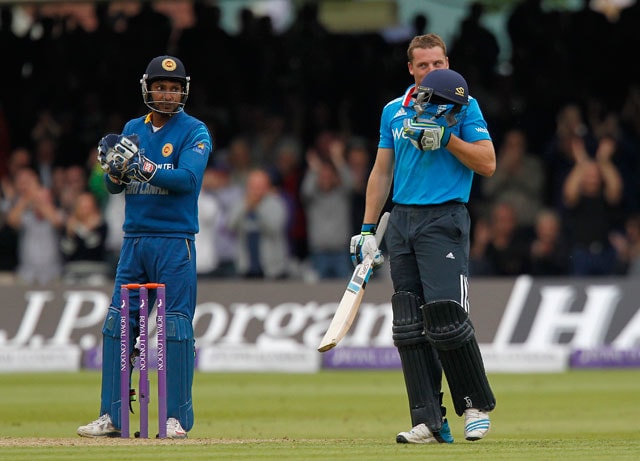 Cook's side were all but out of the contest in the fourth one-day international at Lord's when wicketkeeper/batsman Buttler came in with England 111 for five chasing a near-record 301 for victory.

Yet the 23-year-old Lancashire gloveman then proceeded to make a maiden one-day international hundred off just 61 balls before falling in the final over.

Sri Lanka, who'd posted 300 for nine, won by seven runs to level the five-match series at 2-2 ahead of Tuesday's finale at Birmingham's Edgbaston ground.

His actual century was the quickest, in terns of balls faced by an England batsman at this level, surpassing the 69 balls the now 'exiled' Kevin Pietersen took to make a century against South Africa at East London in 2005.

Buttler also broke the equivalent Lord's ground record of 82 balls for an ODI hundred that had stood since 1975 when West Indies great Clive Lloyd made a memorable century during the inaugural World Cup final.

Together with Ravi Bopara (51), Buttler shared a sixth-wicket stand of 133 as he replied to an impressive century by opposing wicketkeeper Kumar Sangakkara (112) and the left-hander's partnership of 172 with Tillakaratne Dilshan (71).

But England ultimately paid the price for a slow start to their run-chase with Chris Jordan caught in the deep and Buttler run out in a tense final over from Lasith Malinga.

"It's a hell of an innings. He doesn't deserve to be on the losing side, playing like that," Cook said.

"It's one of the best innings I've seen."

Buttler is not a physically imposing player but, blessed with the reflexes of a talented racquet-sports player, still manages to generate impressive bat speed.

"I don't know where he gets his power from," said Cook, an orthodox opening batsman. "It is an incredible talent.

"Having him coming in, you're never out of the game.

"He's got great hand-eye (coordination), and his head is so still when he hits the ball so incredibly well."

But with Malinga reducing England to 10 for two by removing Cook and fellow opener Ian Bell, the hosts were always up against it.

"When you lose wickets at the top of the order, you do have to rebuild and give yourself that chance to take the game deep," added Cook. "You know you can catch up.

"It's not the ideal way of playing it -- because when you score 120 odd off 70 balls, you should win games of cricket.

"But he (Buttler) almost got us there."

Sri Lanka captain Angelo Mathews was equally impressed by Buttler's century, saying: "Jos played an unbelievable innings. He nearly took us apart, and took the game away from us.

"He can hit the ball out of the park at any given time. He's an extremely talented young player, who played the innings of his life."

However, Mathews added: "But we stuck to our plans, did the basic things right."

With Matt Prior struggling with an Achilles injury after being dropped during England's 5-0 Ashes debacle in Australia and doubts over Jonny Bairstow's suitability, there has been speculation regarding Buttler making could a Test debut come next month's series opener against Sri Lanka at Lord's.

But there are doubts over whether Buttler's glovework in particular is up to the task and Cook, while confident the former Somerset star would eventually play Test cricket, appeared to share those concerns.

"He knows what he's doing (but) I think he's yet to find that in four-day cricket.

"But a guy who is as talented as that, there's no reason why he can't.

"I think he will become a very good Test player at some stage for England.

"Talented people find ways to do that, but I don't think he's quite ready yet for that role."