England vs Australia: Josh Hazlewood took a miserly 3-26 from his maximum 10 overs that stifled England's pursuit of a target of 295 from the outset. 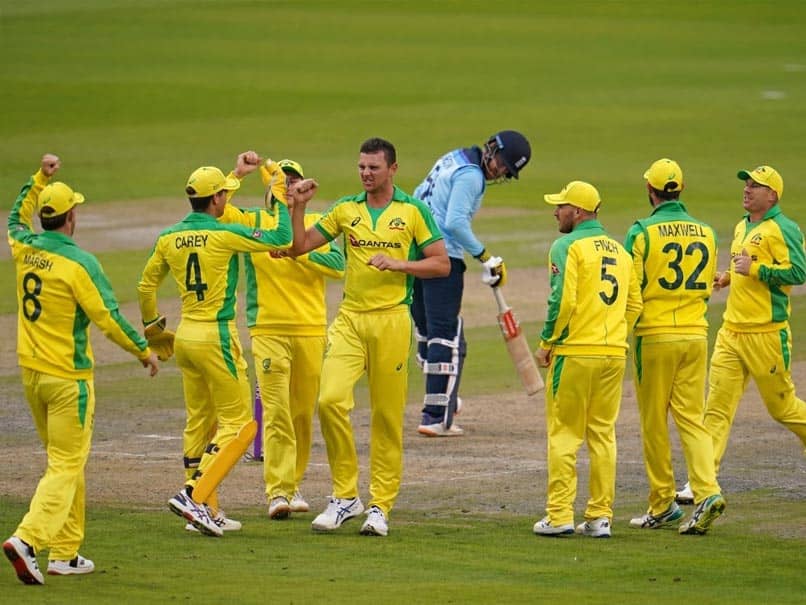 Josh Hazlewood was nearly unplayable during a stunning opening spell of 2 wickets for 5 runs in 6 overs.© AFP

Australia fast bowler Josh Hazlewood insisted it was a case of "onwards and upwards" after he starred in a 19-run win over world champions England in the first one-day international at Old Trafford on Friday. Hazlewood took a miserly 3-26 from his maximum 10 overs that stifled England's pursuit of a target of 295 from the outset, removing opener Jason Roy and Test skipper Joe Root for single figure scores as the hosts limped to 22-2 off the first 10 overs. This was Australia's first 50-over match against England since a crushing eight-wicket defeat by their arch-rivals in the semi-finals of last year's World Cup at Edgbaston.

Hazlewood, however, didn't play in that match after being controversially omitted from the World Cup squad, with the selectors instead wanting him to regain full fitness following a back injury for the subsequent Test series in England, where Australia retained the Ashes in a 2-2 draw.

Asked if the way he bowled on Friday made his World Cup absence all the more painful, Hazlewood replied: "Nah it's onwards and upwards. That's a long time ago now, so always looking forward."

The 29-year-old was close to unplayable during a stunning opening spell of two wickets for five runs in six overs.

"England's top order is probably the form top order in the world in the last three or four years, so I guess going against them is a good measure of where you're at," Hazlewood said after what was just Australia's third win in 14 ODIs against their oldest foe.

Meanwhile, England captain Eoin Morgan said Hazlewood had enjoyed a "day out" after his side went 1-0 down in a three-match series that continues Sunday.

"They (Australia) were outstanding, incredibly accurate and they got the ball moving," he said. "It's not often it happens to us."

Sam Billings kept England in the game with 118, his maiden ODI hundred, after sharing a century partnership with Jonny Bairstow (84) following the hosts' collapse to 57-4.

Billings was the only member of England's XI on Friday not involved in the World Cup squad, with his inclusion owing much to star all-rounder Ben Stokes still being on compassionate leave with his ill father in New Zealand.

Billings, reflecting on his "mixed feelings" at making a hundred in a losing cause, told Sky Sports he was keen to "keep putting scores on the board" after what was just his 19th ODI appearance in a five-year England career.

The 29-year-old Kent batsman added, however: "I don't think it matters how many runs I get, I know I'm only keeping Stokesy's chair warm for him."

Morgan, however, insisted Billings had batted brilliantly on the back of "sporadic" chances caused by the fact he, as well as Jos Buttler and Stokes, had often been at No 6 instead.

"But today he (Billings) really stood out in a spot that is really difficult to bat, where you can be thrown in at all different circumstances," said Morgan.

Jonny Bairstow England vs Australia, 1st ODI Cricket
Get the latest updates on IPL 2021, IPL Points Table , IPL Schedule 2021 , live score . Like us on Facebook or follow us on Twitter for more sports updates. You can also download the NDTV Cricket app for Android or iOS.