The Delhi Daredevils trying their bit to encourage youngsters towards the shortest format of the game. Might be bad considering the longer formats though. 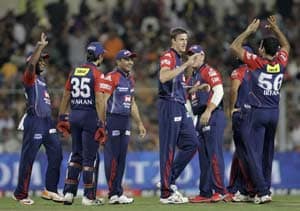 48 schools from Delhi and NCR region will be taking part in the month long competition.

The glittering trophy was unveiled at the Feroz Shah Kotla today by India's World Cup winning U-19 captain Unmukt Chand.

"Inter-School cricket is a fantastic platform for these budding cricketers. This is where the competition starts, one understands the meaning of team and also starts valuing friendships. Even I had played a lot of school cricket till two years back for Modern school (Barakhamba)," Unmukt told the gathering and then interacted with the students who were seen jostling for his autograph.

Some of the notable institutions which are participating in the tournament are Modern School (Barakhamba Road), DPS (RK Puram), Amity International (Noida), Salwan Public School (Rajinder Nagar and Mayur Vihar).

Schools have been clubbed in 16 groups with three schools in each group. The spotters will be Daredevils' Head of Cricket Operations T A Sekar, former players Sunil Valson who is also the AVP Operations of GMR Sports) and former offie Ashish Kapoor (AVP Sports Administration GMR Sports).

Some of the talented boys from the tournament will get a chance to interact with the Daredevils stars such Virender Sehwag, Kevin Pietersen, David Warner to name a few.

Comments
Topics mentioned in this article
Delhi Daredevils Cricket Virender Sehwag Unmukt Chand
Get the latest Cricket news, check out the India cricket schedule, Cricket live score . Like us on Facebook or follow us on Twitter for more sports updates. You can also download the NDTV Cricket app for Android or iOS.