At the close, New Zealand were finding batting difficult under lights and were 116 for five with a result looming on Sunday's third day in the scheduled five-day Test. 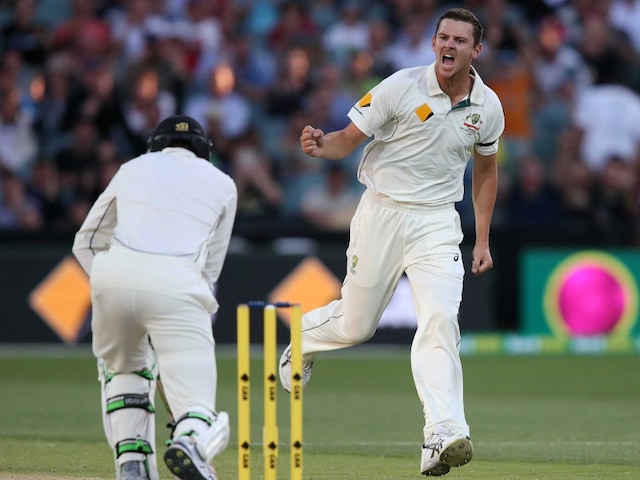 New Zealand's held a tenuous 94-run lead in the absorbing day-night third Test after a second day of tumbling wickets at the Adelaide Oval on Saturday. (Scorecard)

The Kiwis, trailing 1-0 in the series, struggled to build a defendable total to present Australia in the fourth innings after another fast-paced day's cricket of 13 wickets before 42,372 fans.

At the close, the Black Caps were finding batting difficult under lights and were 116 for five with a result looming on Sunday's third day in the scheduled five-day Test.

New Zealand had lost their top batsmen and still at the crease were B.J. Watling on seven with debutant Mitchell Santner not out 13.

Josh Hazlewood led the Australian attack in the absence of injured spearhead Mitchell Starc as the pink ball again dominated the bat.

Hazlewood removed both openers with mesmerising ball movement under lights. Martin Guptill sliced to Mitch Marsh in the gully for 17 and Tom Latham was tempted by a wider delivery and was caught behind for 10.

Hazlewood had Kane Williamson dropped on one by Adam Voges in the slips but the star Kiwi batsman soon feathered a catch to Nevill off Mitch Marsh for nine to complete a low-scoring match.

The second day turned on a contentious challenge decision in Australia's favour before dinner, enabling them to go on and grab a 22-run innings lead.

Nathan Lyon survived a review in which 'Hot Spot' revealed a mark on the back of his bat before he had scored.

The review was churned over for minutes before the TV umpire Nigel Llong decided there was not enough to go on despite the Hot Spot evidence to give Lyon out, caught off spinner Santner, with Australia reeling at 118 for eight and trailing the Kiwis by 84 runs.

Lyon walked three-quarters of the way off the ground believing he was out before he returned to continue batting and join in a record Australian trans-Tasman series 74-run ninth-wicket stand with Peter Nevill.

Lyon was eventually out for 34 as the Australians hit back to take an innings lead with incapacitated Mitchell Starc smashing two massive sixes off spinner Mark Craig.

Starc, who came into bat at No.11 after being diagnosed with a stress foot fracture on Friday, thrilled the home crowd with his prodigious hitting.

Nevill was the hero and was the last man out for his highest Test score of 66 leaving the hobbling Starc unbeaten on 24 which included two sixes and three fours.

Doug Bracewell finished his side's best bowler with three for 18 off 12.1 overs.

It was rough justice for the Kiwis, who have been on the receiving end of some controversial umpiring decisions.

Australia were in dire trouble at 116 for eight at tea after a rampant Kiwi bowling performance in the first session.

The Black Caps snared Steve Smith's prized wicket when he charged off-spinner Craig only to be caught by wicketkeeper B.J. Watling.

The Kiwis had the Australians well on the back foot with Peter Siddle out four balls later in the same Craig over and then Hazlewood was bowled by Santner for four in the final over before tea.

Just 62 runs were scored by Australia for the loss of six wickets in the first session off 29.5 overs.

Smith, who raised his fighting half-century off 108 balls, lost three batting partners before he fell.

Adam Voges edged to Guptill at third slip for 13 and Shaun Marsh, needing a big score to justify his Test recall, was run out for two by a brilliant piece of fielding from Kiwi skipper Brendon McCullum at mid-off.

Things got worse for the Marsh family when younger brother Mitchell was caught behind off Bracewell for four.

Comments
Topics mentioned in this article
Australia Cricket Team New Zealand Cricket Team Josh Hazlewood Mitchell Marsh Bradley Watling Cricket
Get the latest Cricket news, check out the India cricket schedule, Cricket live score . Like us on Facebook or follow us on Twitter for more sports updates. You can also download the NDTV Cricket app for Android or iOS.