David Warner Posts Image Of Tree, Asks Fans To Name It. Gets Trolled By Pat Cummins

In a recent social media post, David Warner uploaded the image of a tree and asked his followers to identify it. Pat Cummins trolled him for the post with a hilarious comment.

David Warner is quite active on social media. The Australian opener often uploads dance videos with his family on Indian movie songs. Now, in a recent social media post, he uploaded the image of a tree and asked his followers to identify it. His Australian teammate Pat Cummins, however, trolled him as he commented "Awesome content". The two have shared the Australian dressing room for long. 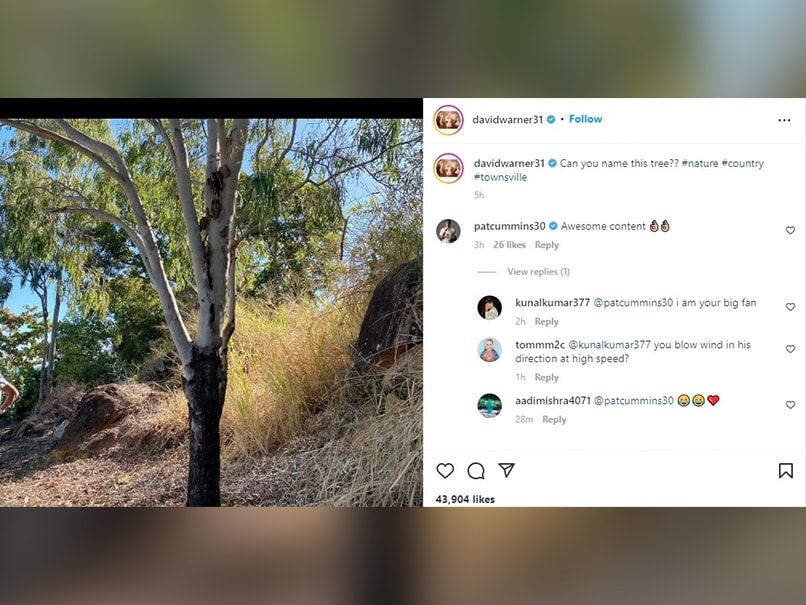 Recently, Warner said that the cricket calendar for the upcoming years is "scary". He added that it is "difficult" for players to play so many matches.

"The schedule looking for the next five years is scary. I am glad that I am at the back end because it's very-very difficult. I am obviously with the family; a lot of guys have young families as well. That's going to be difficult... It's very difficult at this level to try and compete (in) 80-90 games a year... That's a lot of cricket," said Warner to media.

Warner on Sunday signed a two-year deal with Sydney Thunder. He will join the Thunder after his international commitments end at the completion of January's Sydney Test and could be available for as many as five regular season matches - including the summer's second blockbuster Sydney Smash against the Sixers - and the finals.

Pat Cummins
Get the latest updates on Fifa Worldcup 2022 and check out  Fifa World Cup Schedule, Stats and Live Cricket Score. Like us on Facebook or follow us on Twitter for more sports updates. You can also download the NDTV Cricket app for Android or iOS.