Vettori said that during his injury lay-off, he had contemplated retirement but that now his intention was to play in all three international formats and represent New Zealand at the 2015 World Cup which they will co-host with Australia. 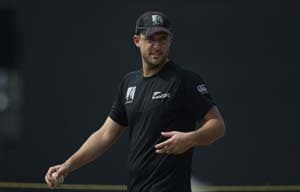 New Zealand great Daniel Vettori said he was looking forward to returning to international action in the first one-dayer against England at Lord's on Friday.

The 34-year-old left-arm spinner, who has been struggling with an Achilles injury, last played international cricket in a World Twenty20 match against England in Sri Lanka last September.

And Friday's match will be his first 50 overs per side international since he took time out from that format following New Zealand's 2011 World Cup semi-final defeat by Sri Lanka.

New Zealand rushed over Vettori ahead of schedule before the second Test at Headingley after spinner Bruce Martin suffered a tour-ending calf injury.

But in the end they decided against playing Vettori in Leeds because of concerns his body would not stand up to a lengthy bowling stint.

New Zealand went on to lose the Test by 247 runs as they suffered a 2-0 series whitewash.

"I think it was just a call to get me over and see how things were," Vettori said. "But it's been a long time since I bowled more than 10 overs really. So it was too much of a stretch."

For all his experience, Vettori admitted to a degree of nervousness heading into Friday's match.

"I've only bowled a couple of times in domestic games as well, so there's a little bit of trepidation going into it.

"But I'm looking forward to it."

Vettori said that during his injury lay-off, he had contemplated retirement but that now his intention was to play in all three international formats and represent New Zealand at the 2015 World Cup which they will co-host with Australia.

"Yes, I think so, you contemplate it (retirement). But I hope I'm still youngish, and can get a few more years out.

"When you're away from the game, it probably rejuvenates your love of it -- and you actually want to get back into it.

"I need to get through this and go from there. But I'd love to play Test matches again," said Vettori, who when asked what was the hardest thing about having an Achilles injury jokingly replied: "Batting, bowling, running, fielding.

"I got through a lot of training in India, and then a club game recently. But it's not the same -- I'd love to have a bit more of a build-up, but it is what it is."

Vettori did play on tour in a warm-up match against a Northamptonshire Select XI, helping himself to 150 and five wickets in the process.

"No disrespect to the opposition, but it was relatively easy," he said.

Playing at Lord's means arguably even more to overseas internationals than their England counterparts, given how comparatively few chances they get to appear at the 'home of cricket'.

Vettori, asked for his favourite memory of Lord's went back 14 years to a memorable New Zealand Test win that formed part of a victorious series victory against England.

"That's pretty easy -- the 1999 Test match and series. Winning here was a pretty special occasion not only for the team but everyone involved in New Zealand cricket."

Now the upcoming one-day series will, Vettori believes, stand New Zealand in good stead for the subsequent 50-overs per side Champions Trophy one-day tournament in England and Wales.

"It's the best preparation we could possibly have, playing three one-dayers here.

"While we want to win (against England), I think you do look towards that Champions Trophy."

Comments
Topics mentioned in this article
Cricket Daniel Vettori Jade Dernbach Alastair Cook
Get the latest Cricket news, check out the India cricket schedule, Cricket live score . Like us on Facebook or follow us on Twitter for more sports updates. You can also download the NDTV Cricket app for Android or iOS.