After Dale Steyn's early blows Australia A were able to recover to a strong position by the end of the first day's play against South Africa in Sydney. 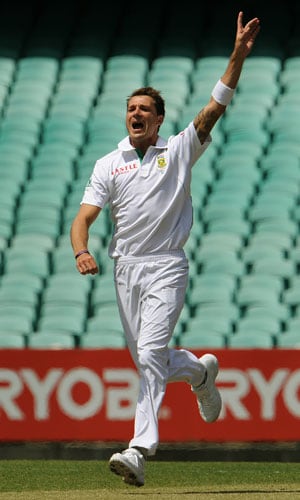 Australia A recovered from an early setback to thwart South Africa's Test-strength bowling attack on the opening day of their three-day tour match at the Sydney Cricket Ground on Friday.

Australia A fought back from 44 for three in the 14th over to be 325 for seven off 90 overs at the close after winning the toss in the tour warm-up game before next week's opening Test in Brisbane.

Upon the quick dismissals of Quiney and Smith Australia A slumped to 185 for six before another rebuilding partnership of 133 between Glenn Maxwell (64) and Alex Doolan (76 not out) saw the Australian selection through until the final few overs of the day.

What began as an encouraging day for South Africa's vaunted pace brigade fell away to a long day in the field.

Steyn remained the pick of the bowlers, finishing with 3-43, while Rory Kleinveldt snared 2-45.

Imran Tahir bowled better than his figures of 2-114 off 28 overs.

It was a forgettable day for third paceman Vernon Philander, the No.2 ranked bowler in Test cricket, who failed to take a wicket and finished with 0-76 from 16 overs.

Maxwell was the aggressor after tea, hammering the spin trio of Tahir, JP Duminy and Faf du Plessis as he smashed eight fours before being caught behind off Steyn.

Quiney hit 13 boundaries to top-score on the opening day.

Steyn produced the pick of the wickets, clean bowling opener Liam Davis (10) with a gem of a delivery that pitched on middle and beat the bat before clipping off-stump.

Quiney looked sharp before he was brought undone by Steyn, who enticed an edge to Graeme Smith at first slip, while Steve Smith (67) lasted just three more overs before he became Tahir's second LBW victim of the day.

Jacques Kallis, recovering from a chest infection, and Morne Morkel were rested from an otherwise full-strength South African team, though Kallis came on as a replacement fielder late in the day.

The first of three Tests gets underway at the Gabba on November 9.

Comments
Topics mentioned in this article
Dale Steyn Stephen Barry Smith Rob Quiney Cricket
Get the latest updates on IPL 2021, IPL Points Table , IPL Schedule 2021 , live score . Like us on Facebook or follow us on Twitter for more sports updates. You can also download the NDTV Cricket app for Android or iOS.