Prominent among those who have visited him in the hospital include former skipper Javed Miandad, Inzamam-ul-Haq and Shahid Afridi, Shoaib Akhtar etc., while many have sent get-well-soon cards and bouquets to Imran. 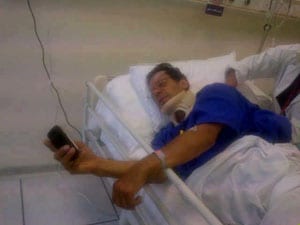 A stream of former cricketers have been visiting the Shaukat Khanum hospital to inquire about the well-being of former Pakistan captain-turned politician Imran Khan who got injured during an election rally in Lahore last week.

Prominent among those who have visited him in the hospital include former skipper Javed Miandad, Inzamam-ul-Haq and Shahid Afridi, Shoaib Akhtar etc., while many have sent get-well-soon cards and bouquets to Imran.

Imran has suffered spinal injuries after he fell down from a lifter while climbing a stage during the rally.

According to his doctors and senior leaders of his Tehreek-e-Insaaf party, Imran has been very active even from his hospital bed for the general elections due on Saturday.

A source in the cricket board said that members of the Pakistan team, which will leave for England next week for the Champions Trophy, are also planning to pay him a visit to boost his spirits.

The Pakistani players who have just finished a training camp in Abbotabad, had held a special prayer session to pray for Imran's health.

"He is a cricket legend for us and we all admire and respect him. We were all shocked and sad by the incident. We are all praying he gets completely well soon," Pakistani spinner, Saeed Ajmal said.

Comments
Topics mentioned in this article
Cricket Shoaib Akhtar Waqar Younis Wasim Akram Shahid Afridi Pakistan Cricket Team Javed Miandad
Get the latest updates on ICC T20 Worldcup 2022 and CWG 2022 check out the Schedule, Live Score and Medals Tally. Like us on Facebook or follow us on Twitter for more sports updates. You can also download the NDTV Cricket app for Android or iOS.