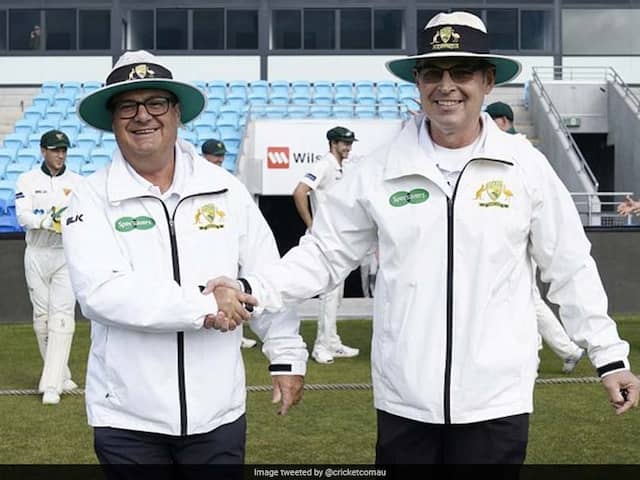 The pair stood in their final match together in a Sheffield Shield game in March.© Twitter

Cricket Australia (CA) on Friday praised Simon Fry and John Ward, who announced their retirement from elite umpiring. Fry and Ward have enjoyed distinguished careers at international and domestic level over the past two decades. The pair stood in their final match together, in Tasmania's Marsh Sheffield Shield victory over New South Wales at Blundstone Arena in March. "We extend our congratulations and thanks to both Simon and John on their outstanding contributions to umpiring in Australia," Peter Roach, CA Head of Cricket Operations said in an official statement.

"Throughout their careers, Simon and John have demonstrated outstanding skill and leadership. Both depart the umpiring ranks at the top of their craft and we wish them well in their retirement," he added.

"Never would I have thought that a chance meeting with a former teammate would lead to a twenty-year career in the game that I love. I believe the time is right to step aside and for someone else to experience the same opportunities, challenges and sense of satisfaction that I have enjoyed," Fry said.

"I feel fortunate to have made many wonderful friendships which I will treasure forever. I wish to thank the SACA, CA and the ICC for their support throughout my career. Most importantly, I thank my wife Rachel, our children and our families for their encouragement and support over the years," he added.

Victorian umpire Ward announced his retirement after 19 seasons in the elite ranks.

"I feel very fortunate to have umpired cricket at this level for so long. It has been a privilege. The relationships I''ve developed with on-field colleagues, match referees, CA staff and players have been the highlight for me," Ward said.

"My retirement creates an opportunity for someone else to experience this high-performance environment and I hope they enjoy it as much as I did," he added.