Guyana Amazon Warriors secured a spot in the knockout stages of the Caribbean Premier League with a stunning victory versus Barbados Tridents in Lauderhill, Florida 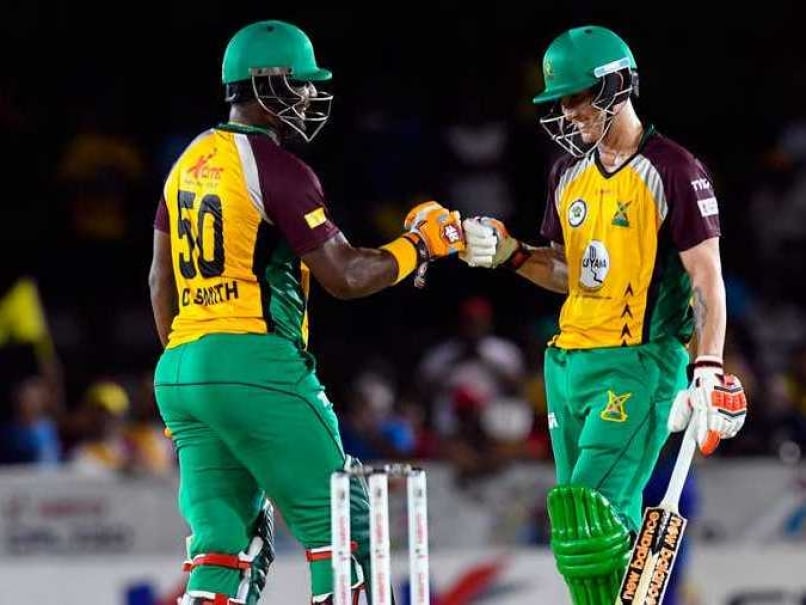 Dwayne Smith and Nic Maddinson during their stand of 92. (Image: CPL/Sportsfile)

Guyana Amazon Warriors became the second team after Jamaica Tallawahs to qualify for the knockout stages of the Caribbean Premier League. The Warriors whipped Barbados Tridents by six wickets at the Central Broward Regional Park in Lauderhill, Florida on Thursday.

Dwayne Smith and Nic Maddinson scored fifties and their opening stand of 92 was enough to take the warriors past a sub-par Tridents total of 142 for seven in 20 overs.

Tridents lost five wickets for 26 runs in the space of 33 balls to blow away a good start provided by David Wiese, who smashed a 31-ball 40 on a good batting track.

Shoaib Malik remained unbeaten on 55 as Tridents batsmen failed to give the Pakistani necessary support to build a challenging score.

Chasing that sub-par total, Amazon Warriors paced their innings well as Smith passed 1,000 CPL runs. Amazon Warriors were 51 for no loss at the end of the sixth over PowerPlay.

Smith was well supported by Australian Maddinson who recovered from a disappointing showing in his first appearance in the last match to score 50.

Smith fell in the 11th over and Maddinson departed three overs later, but the game was already won by then. The Amazon Warriors also lost the in-form Chris Lynn before they reached their victory target with 10 balls to spare.

This loss is not the end of the road for the Tridents, but they are now left relying on other results going their way to make the knockout stages.

Comments
Topics mentioned in this article
Dwayne Smith Nic Maddinson Shoaib Malik Cricket
Get the latest updates on India vs South Africa and check out  Schedule, Results and Live Score. Like us on Facebook or follow us on Twitter for more sports updates. You can also download the NDTV Cricket app for Android or iOS.