While Johnson Charles and Sunil Narine shone for the West Indies, Adam Voges and James Faulkner continued their run of good form for Australia. 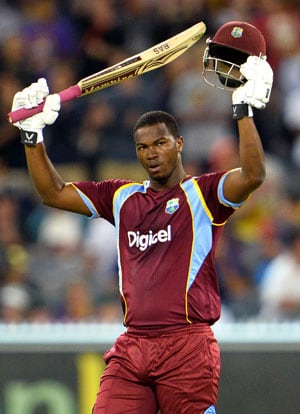 # Since winning by 10 wickets in the Perth Test in February 1997, West Indies' aforesaid win is their first in 33 international games against Australia in Australia. (Lost 29 and NR/Drawn 3).

# Both teams have won five games each out of ten played in T20Is.

# West Indies (191/6) have registered their joint second highest total against Australia in T20Is - their highest being 205 for four at Colombo, RPS on October 5, 2012.

# Kieron Pollard (3/30) has produced his best bowling performance in Twenty20 Internationals, surpassing the 2 for six against Australia at Colombo, RPS on October 5, 2012.

# Pollard has received his first Man of the Match award in T20Is.

# Marsh and Voges put on 74 - Australia's second highest for the second wicket against the West Indies in T20Is, next only to the 108 between Michael Hussey and Shane Watson at Gros Islet on March 27, 2012.

# James Faulkner (3/28) has produced his best bowling performance in T20Is.

# Clint McKay (4-0-44-0) has registered his worst bowling performance in T20Is.Â  He has failed to claim a single wicket in four out of five games.

# Sunil Narine is averaging 17.38 - 18 wickets in fourteen games in T20Is.Â  Amongst the bowlers with 10 wickets or more for the West Indies, Narine's average is the best.