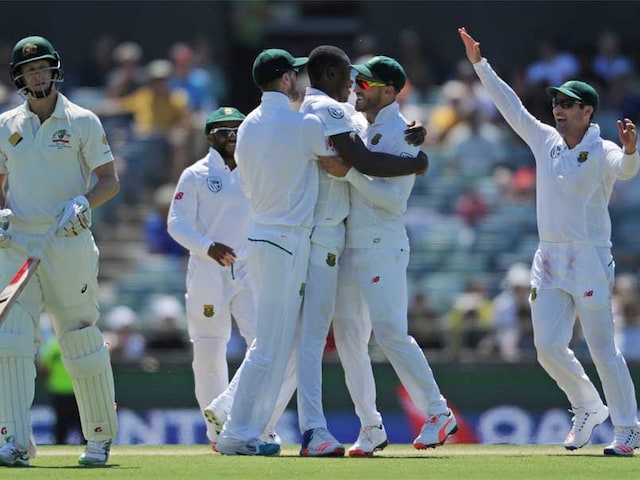 Skipper Steve Smith and his Australia team are under big pressure from South Africa and their own selectors as they try to bounce back from one of their worst losing streaks in the second Test at Hobart on Saturday.

The Australians sunk to a comprehensive 177-run loss to the Proteas in the series opener in Perth with the team coming under heavy criticism over their capitulation.

It was Australia's first loss in an opening Test of their home season in 28 years and they have now slumped to four straight defeats after crashing in all three Tests on their July-August tour of Sri Lanka.

"I would say every spot is under pressure," Australian coach Darren Lehmann admitted, with Smith adding: "Every aspect of our game needs improvement."

The last time Australia lost four Tests in a row in India three years ago, then coach Mickey Arthur was sacked.

Lehmann is not seen as under the same pressure as Arthur but Smith's captaincy has come under close scrutiny with former South Africa captain Graeme Smith this week saying that he looked "a bit lost".

While there could be up to three enforced team changes for Hobart with injuries to Shaun Marsh, Adam Voges and Peter Siddle, the entire Australian team is under the gun for their positions ahead of the third day-night Test in Adelaide later this month.

South Africa, although ranked five in Tests to Australia's three, were bowled to victory in Perth by electric young paceman Kagiso Rabada, who stepped up when Steyn broke down with the shoulder injury on the second day.

"I am incredibly proud of him and I have a lot of respect for anyone who puts their hands up and does the hard yards," Proteas captain Faf du Plessis said of Rabada's staunch 31-over effort in Australia's second innings.

South Africa recovered from a shaky first innings total of 242 to turn the Perth Test around, triggering a first-innings collapse as Australia lost 10 wickets for 86 and then taking control through centuries from JP Duminy and Dean Elgar.

Australia, who have only lost once in 12 Tests at Hobart's Bellerive Oval, are likely to bring back Joe Burns for injured opener Marsh, while speedster Joe Mennie is expected to make his Test debut for the sidelined Siddle.

Callum Ferguson may also get a start in the middle order if Voges does not recover in time from hamstring trouble in the five-day turnaround from Perth.

Australia's new-ball attack of Mitchell Starc and Josh Hazlewood looked a little underdone in Perth after recent spells out of the game and were forced to bowl a total of 103.4 overs between them in Perth.

"All bowlers are going to be pretty sore and tight. We'll just have to see how they pull up and make a call from there. They (South Africa) will have the same issues," Lehmann said.

South Africa will decide between Morne Morkel or Kyle Abbott as Steyn's replacement as the third paceman in their only likely change from Perth.

Complicating Australia's predicament is that rain is forecast for the first three days in Hobart in a game they must win to take the three-Test series to a decider in Adelaide from November 24.

Comments
Topics mentioned in this article
Cricket Australia Cricket Team South Africa Cricket Team
Get the latest updates on IPL 2020, check out the IPL Schedule for 2020 and Indian Premier League (IPL) Cricket live score . Like us on Facebook or follow us on Twitter for more sports updates. You can also download the NDTV Cricket app for Android or iOS.