Australia fast bowler Shaun Tait on Monday announced his retirement from one-day cricket to concentrate on the Twenty20 form of the game. 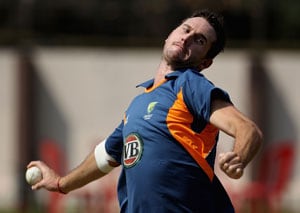 Australia fast bowler Shaun Tait on Monday announced his retirement from one-day cricket to concentrate on the Twenty20 form of the game.

Tait, 28, who has just returned from the World Cup on the subcontinent, said he will step down from the national and South Australia one-day teams in an attempt to prolong his career.

"I have decided to retire from one-day cricket for both Australia and the South Australian Redbacks," Tait said in a statement released through Cricket Australia.

"This is not a decision I have taken lightly, but I believe it is one that will help me to prolong my cricketing career through the many Twenty20 avenues available.

"In reality, playing all year round for Australia and South Australia is not allowing my body to stand up as I would like and I do not want to be forced into retirement through career-ending injuries."

"However, with our involvement now finished I feel it is the perfect time to move on in a new direction," said Tait, who was a member of Australia's 2007 World Cup-winning side.

"Bowling at the speeds he generates places an unusual strain on his body and Cricket Australia respects the decision he makes today," Brown said.

Tait only played three Tests but in 35 ODI appearance he captured 62 wickets at 23.56.

Comments
Topics mentioned in this article
Cricket Australia Cricket Team Shaun Tait
Get the latest updates on ICC T20 Worldcup 2022 and CWG 2022 check out the Schedule, Live Score and Medals Tally. Like us on Facebook or follow us on Twitter for more sports updates. You can also download the NDTV Cricket app for Android or iOS.