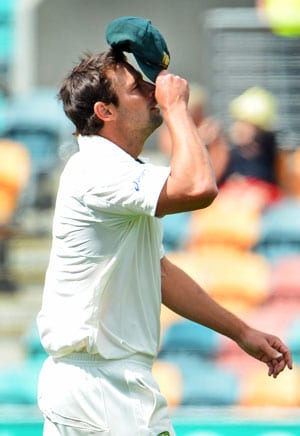 Australia lost another fast bowler on Sunday with Ben Hilfenhaus leaving the field early on the third day's play of the first Test against Sri Lanka.

The Tasmanian swing bowler departed after delivering just two balls of his 13th over in the opening hour in Hobart. Team officials said he had a left side strain and was taken to hospital for scans.

Hilfenhaus had figures of 1-30 after claiming the wicket of Dimuth Karunaratne for 14 on Saturday.

Australia's fast bowling stocks are already depleted with James Pattinson (side), Patrick Cummins (back) and Josh Hazlewood (foot) all out of action.

Comments
Topics mentioned in this article
Cricket Australia Cricket Team Ben Hilfenhaus
Get the latest updates on ICC Women's Cricket World Cup 2022 and IPL 2022, check out the Schedule , Live Score and IPL Points Table. Like us on Facebook or follow us on Twitter for more sports updates. You can also download the NDTV Cricket app for Android or iOS.