Australia cruised to a seven-wicket victory over England with more than five overs to spare to remain unbeaten after three games in the triangular Twenty20 series in Melbourne on Saturday. 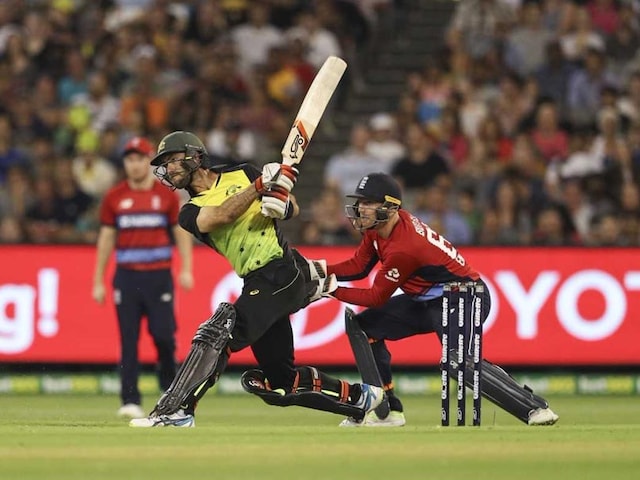 The win ensured Australia will play in the tri-series final in Auckland on February 21.© AFP

Australia cruised to a seven-wicket victory over England with more than five overs to spare to remain unbeaten after three games in the triangular Twenty20 series in Melbourne on Saturday. The Australians restricted England to 137 for seven off their 20 overs with paceman Kane Richardson taking three wickets and then the home team knocked up the runs off just 14.3 overs. A match-winning partnership of 65 between Glenn Maxwell (39) and D'Arcy Short (36 not out), plus cameos from Chris Lynn (31) and Aaron Finch (20 not out from five balls), got Australia comfortably home. The win ensured Australia will play in the tri-series final in Auckland on February 21 with preliminary matches now switching to New Zealand. The game-defining sequence came when Maxwell and Short accelerated the score from 65 for two at the end of the ninth over to 104 for two after the 11th, 39 runs flowing over just two overs.

"Our players have been in tremendous form coming off the Big Bash League and they are playing with freedom and they're playing fearless," Australia skipper David Warner said.

"The bowlers executed their game beautifully and the way the batters finished it off was absolutely clinical."

But Warner's form is again in the spotlight after his relentless playing schedule. This time he lasted just four balls, nicking a David Willey outswinger on two.

Warner is the only member of the Test side to have played for Australia in every format this summer and has struggled for form in the ODIs and T20s.

He is expected to travel with the T20 side to New Zealand before heading straight to South Africa for the first of four Tests.

It was a second drubbing for England after going down by five wickets to Australia in Hobart on Wednesday.

"It was another poor performance for us," stand-in captain Jos Buttler said.

"We didn't quite soak up the pressure early on with the bat losing early wickets to back it up for the end and none of us kicked on.

"Again the power of Australia proved too much."

Buttler was deputising for injured skipper Eoin Morgan, who missed the match after straining his right groin during training on Friday.

Pacemen Kane Richardson and Billy Stanlake claimed five wickets between them after Australia was sent into bat.

England were reeling at 34 for three in the fourth over when David Warner ran out Dawid Malan with a brilliant direct hit.

James Vince was skittled by a slower ball from Andrew Tye before Buttler (46) and Sam Billings (29) steadied the ship.

Billings struck the only six of England's innings when he smashed Ashton Agar over long on in the 14th over, but he fell to Stanlake with Warner taking the first of two catches at mid-off.

Comments
Topics mentioned in this article
Australia Cricket Team England Cricket Team Chris Lynn Aaron Finch Glenn Maxwell D'Arcy Short Cricket
Get the latest updates on IPL 2020, check out the IPL Schedule for 2020 and Indian Premier League (IPL) Cricket live score . Like us on Facebook or follow us on Twitter for more sports updates. You can also download the NDTV Cricket app for Android or iOS.