Bengal face an uphill battle now with just another 98 runs to defend and still nine wickets in hand for Punjab. 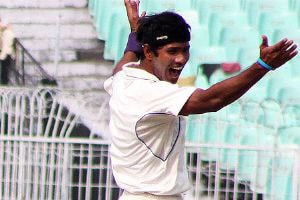 After his dream first-class debut where he got a double hundred against Hyderabad, young Punjab opener Jiwanjot Singh scored another matured hundred in his second game as Punjab are on their way to bat Bengal out of the second round Ranji Trophy encounter, on Saturday. (In photo, Bengal's Ashoke Dinda)

Replying to Bengal's first innings score of 326, Jiwanjot who is batting on 102 in company of another centurion Mayank Sidhana (107 batting, 190 balls, 17x4) grinded a pedestrian Bengal attack as home team reached a formidable 229 for one at stumps.

While Punjab need another 98 runs to take first innings lead, they would ideally look to consolidate and build on the start they have got and push for an innings victory.

For Bengal, it will be an arduous task to save the match as Rahul Sharma could prove to be a handful on a fourth day track where Manoj Tiwary will have to shoulder the responsibility of saving the match.

The Jiwanjot-Sidhana's second wicket unbeaten stand has yielded 206 runs. The Sardar from Patiala has hit 10 fours and concentrated hard during his 201-ball knock that had 10 boundaries.

Sarkar, who primarily bowls inswing failed to beat the two batsmen even once during his spell. A lot was expected off Dinda but he also failed to deliver the goods. The two batsmen were in complete control and dictated the proceedings for the better part of the 70 overs.

Earlier, Wriddhiman Saha became the second Bengal batsmen of the season to miss a century after Subhamoy Das as he was dismissed for 98 with Bengal ending their first innings at 326. Leggie Rahul Sharma who went for 50 runs in his 11 overs came back today to finish with four for 53.