Sacked Pakistan captain Shahid Afridi was on Thursday forced to plead guilty of breaching PCB Code of Conduct after he was threatened to hand harsher punishment and withhold no-objection certificate to play abroad, according to sources. 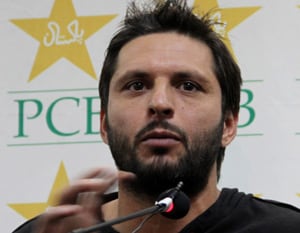 Sacked Pakistan captain Shahid Afridi was on Thursday forced to plead guilty of breaching PCB Code of Conduct after he was threatened to hand harsher punishment and withhold no-objection certificate to play abroad, according to sources.

Reliable sources told PTI that Afridi was given an ultimatum by the Cricket Board and its disciplinary committee that he should admit he had breached the code of conduct or face harsh punishment.

The sources said that Afridi refused to plead guilty twice in the day but finally relented to the threat, resulting to the 4.5 million rupees fine and the grant of NOC to play for Hampshire in English Twenty20 tournament.

"It was not smooth at all. In fact, Afridi appeared before the disciplinary committee thrice before he agreed to admit his guilt and mistakes in breaching the code of conduct," one source said.

He said at the first hearing in the afternoon, Afridi was aggressive with the committee members and made it clear he would neither apologise nor admit his guilt as he had not done anything wrong.

"The first hearing ended in a stalemate in 15 minutes time. Afridi was than called in again after an hour and told he would have to apologise or admit his guilt as part of his deal to seek a NOC from the Board and close the case.

"He again refused pointing out that if he apologise or regret his actions he would lose face in the eyes of the public," the source disclosed.

The source said that it was after the second hearing that the Board's legal advisor Tafazzul Rizvi, who was assisting the disciplinary committee, clearly told the all-rounder that he would have to apologise or admit his guilt if he does not want a harsher punishment.

"Afridi was told in clear terms that the process could not move forward unless he apologised or admitted to breaching the code of conduct and if he couldn't do this he should go home," the source said.

"Afridi was told the Board would follow whatever process was applicable and he would not get any NOC to play abroad," the source added.

The source said it was after this warning that Afridi returned before the disciplinary committee and admitted he was guilty of breaching the code of conduct and also regretted his actions.

"It was after this that the committee decided to take the mitigating circumstances into consideration and just fine him half of the maximum fine possible for his offence," the source said.

The source also revealed that Afridi had been told clearly he would have to apply again for a NOC if he wants to play in the Sri Lankan Premier League next month.

"The disciplinary committee also did not discuss his retirement or future plans for Pakistan," the source added.

He said Afridi, during the hearing, had told the committee members that the Board had removed him as captain without listening to his grievances and acting on the reports of the team manager and coach, which was "grossly unfair".

"Afridi also said that being a senior player the board should have discussed the captaincy issue with him before removing him. He also insisted that coach Waqar Younis was causing a lot of problems in the team," said the source.

Comments
Topics mentioned in this article
Cricket Zulqarnain Haider Stuart Broad Mohammad Asif Zaheer Abbas Shahid Afridi
Get the latest updates on India vs Australia Series, check out the India vs Australia Schedule for 2020-21 and Ind vs Aus live score . Like us on Facebook or follow us on Twitter for more sports updates. You can also download the NDTV Cricket app for Android or iOS.