Michael Clarke's Australians swept Sri Lanka aside by an innings and 201 runs to win the second Test inside three days in Melbourne and seal the series after a comprehensive win in the first Test. 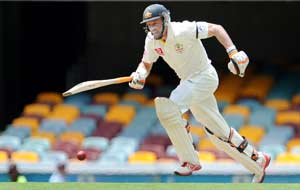 Australia are eyeing a series sweep over battered Sri Lanka in a poignant third Test starting in Sydney on Thursday overshadowed by the death of Tony Greig and marking the end of Mike Hussey's prolific career.

Michael Clarke's Australians swept Sri Lanka aside by an innings and 201 runs to win the second Test inside three days in Melbourne and seal the series after a comprehensive win in the first Test.

The Lions have lost talismanic batsman Kumar Sangakkara with a fractured finger and have other injury issues, adding to an uphill task as Sri Lanka chase their first ever Test win Down Under at the 13th attempt.

Given the gulf between the third-ranked Australians and Sri Lanka, ranked number six, the chances of an against-the-odds win appear remote as Australia build towards their tour of India, starting next month.

Sri Lanka's efforts for redemption come as the cricket world mourns the death of former England captain and broadcaster Greig from a heart attack at the age of 66 in Sydney on Saturday.

Sangakkara said Greig had been a champion of Sri Lankan cricket.

"Tony Greig in Sri Lanka will be very fondly remembered for embracing Sri Lankan players and the Sri Lankan people from 1995 onwards, and getting behind us and promoting us positively across the world," Sangakkara said.

"He's been a very good friend of the Sri Lankan cricket team. He has been a great non-Sri Lankan ambassador. Everyone in Sri Lanka feels sad."

Both teams will observe a minute's silence before the start of the Test and will wear black armbands in his honour.

The match also marks the final Test appearance of veteran batting mainstay Hussey, who announced at the weekend that he wanted to spend more time with his four young children.

Hussey, 37, holds the record for most Test centuries against Sri Lanka, with five tons among his 19 hundreds in 78 Tests at 51.52.

"I feel like I can come into this last Test match with no pressure whatsoever," said Hussey. "I can just really go out there and enjoy it." 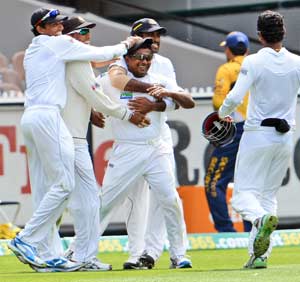 Depending on pitch and weather conditions there could be a Test debut for allrounder Glenn Maxwell, who has come into the Australian squad as a replacement for injured Shane Watson, while left-armer Mitchell Starc will return.

Experienced batsman Thilan Samaraweera said his Sri Lankan team-mates were desperate to put the Melbourne debacle behind them.

"It was really hard to digest that defeat, but that's the past now," Samaraweera said, adding the team could make history by winning their first Test in Australia.

"That is the kind of attitude we are taking into the New Year's Test," he said.

Skipper Mahela Jayawardene will be under extra pressure to perform in the absence of Sangakkara who, like his skipper, has 10,000 Test runs under his belt.

Jayawardene has struggled for runs away from home in recent years and has gone 26 innings in away Tests without making a half-century.