In stark contrast to their parlous position however, the day started promisingly for the Zimbabweans after they were inserted by West Indies captain Darren Sammy with openers Vusi Sibanda and Tino Mawoyo putting on 42 at better than a run-a-minute before the introduction of Shannon Gabriel shifted the tide of play completely. 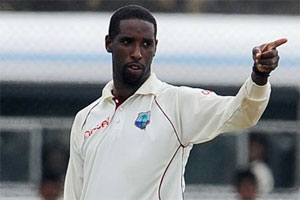 Zimbabwe crumbled yet again to the spin of Shane Shillingford as the West Indies reached a commanding position at the close of the first day of the second and final test at Windsor Park here on Wednesday.

Playing in front of his home fans, Shillingford followed up his nine-wicket match haul from the first test in Barbados the previous week with a haul of five for 59.

Marlon Samuels, who claimed his best test innings figures of four for 13 on the opening day at Kensington Oval, snared three for 15 to bundle out Zimbabwe for just 175.

Kyle Jarvis removed Kieran Powell and Darren Bravo in quick succession when the home side replied, but Chris Gayle (61 not out) and Marlon Samuels (26 not out) reasserted the West Indies dominance in an unbroken 79-run third-wicket stand that took their team to the close at 114 for two.

It leaves the Zimbabweans needing a performance that has been beyond them in recent years in winning the test to square the series.

In stark contrast to their parlous position however, the day started promisingly for the Zimbabweans after they were inserted by West Indies captain Darren Sammy with openers Vusi Sibanda and Tino Mawoyo putting on 42 at better than a run-a-minute before the introduction of Shannon Gabriel shifted the tide of play completely.

Mawoyo was bowled offering no shot and the burly fast bowler then removed Sibanda, who had hammered three consecutive fours off Kemar Roach, the attacking player tamely stroking a full toss low to Roach at mid-on.

From that point on, the visitors struggled to get back on an even keel, Brendan Taylor's topscore of 33 being the captain's best effort of a disappointing tour while debutant Sean Williams showed a bit of character in getting to 31.

Yet none were able to cope with the extravagant bounce and turn extracted by Shillingford especially from the surface, the local boy delivering almost immediately as he was brought on when his "doosra" disposed of Hamilton Masakadza before lunch.

An injudicious attempt at a reverse sweep by Taylor off the same bowler in the afternoon brought about his demise.

Despite some patient resistance by Craig Ervine and Williams, Ervine's dismissal by Samuels - playing down the wrong line to a straight delivery - triggered a slide that saw the last six wickets capitulating for 34 runs.

Faced with another daunting task after this latest batting failure, Zimbabwe enjoyed a glimmer of hope through Jarvis' double-strike with the West Indies score on 35.

But the optimism was to be short-lived, Gayle overcoming an uncertain start to reach his first test half-century in eight innings while Samuels looked as fluent and as threatening as ever heading into the second day of a match that already seems to be out of the reach of the Zimbabweans.