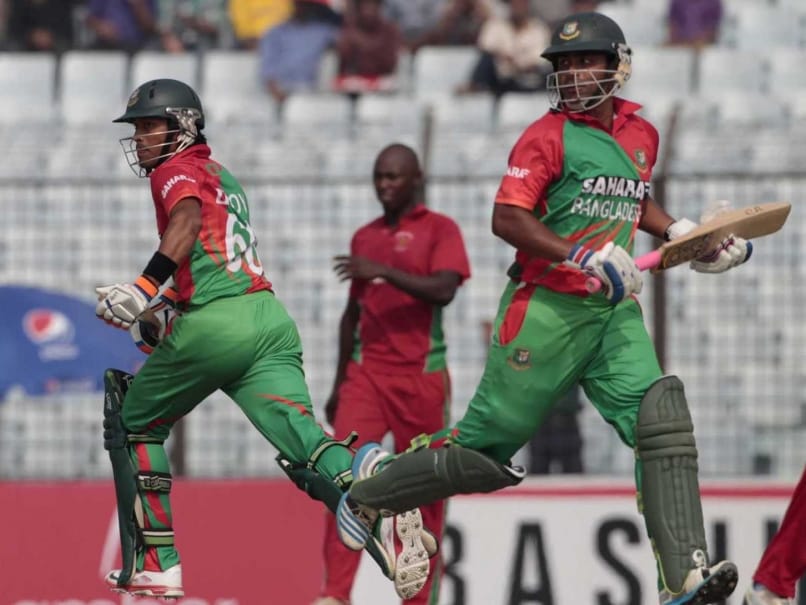 Anamul and Tamim provided Bangladesh the foundation putting on 158 runs in what was the side's second best opening stand after Mehrab Hossain and Shahirar Hossain's 170 against Zimbabwe in 1999.© AFP
Chittagong:

Opening batsmen Anamul Haque and Tamim Iqbal each struck a half-century to set up an easy 68-run win for Bangladesh in the second one-day international against Zimbabwe in Chittagong on Sunday.

Anamul and Tamim provided Bangladesh the foundation putting on 158 runs in what was the side's second best opening stand after Mehrab Hossain and Shahirar Hossain's 170 against the same opponents in 1999.

Bangladesh suffered a major collapse losing six wickets for 46 runs after Tamim was run out, but Mominul Haque, batting at number seven, guided the score past 250-run mark with an unbeaten 33 off 23 balls.

Skipper Mashrafe Mortaza took three wickets in his opening spell to rattle Zimbabwe and left the visitors struggling at 3-40 and the side could never recover from the damage.

Solomon Mire top-scored for Zimbabwe with his maiden fifty -- 50 off 79 balls -- while Regis Chakabva (32) and Elton Chigumbura (38) played late cameos but Bangladesh were always in control.

Arafat Sunny, who finished with 4-29, bowled last three batsmen in his final over after Chigumbura was run out by Sabbir Rahman with a direct hit.

Bangladesh won the first match by 87 runs at same venue on Friday.

The remaining three matches of the series will be held in the capital Dhaka's Sher-e-Bangla National Stadium on November 26, 28 and December 1.

Comments
Topics mentioned in this article
Bangladesh Cricket Team Zimbabwe Cricket Team Anamul Haque Tamim Iqbal Cricket
Get the latest updates on IPL Auction 2023 and check out  IPL 2023 and Live Cricket Score. Like us on Facebook or follow us on Twitter for more sports updates. You can also download the NDTV Cricket app for Android or iOS.