It were New Zealand's Brendon McCullum and Hamish Rutherford who stole the show from England despite valiant effort from Luke Wright and Ravi Bopara. 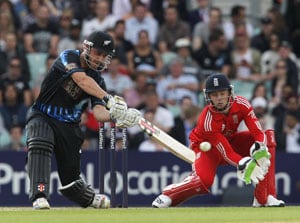 # New Zealand, with their five-run win, have emulated their narrowest victory-margin in terms of runs over England in T20Is. They had won by a similar margin at Durban on September 18, 2007.

# New Zealand (201 for four) have recorded their highest total vs England in T20Is - their third total of 200-plus in T20Is. The said total is New Zealand's first total of 200 or more away from home.

# The match-aggregate of 397 for nine is a record between England and New Zealand in T20Is - the highest involving New Zealand away from home.

# England remains the only team to have recorded three losing totals of 190-plus while chasing in T20Is - their only other total being 193 for seven vs West Indies at The Oval on June 28, 2007.

# Rutherford has been adjudged the Man of the Match for the first time in T20Is.

# Brendon McCullum (68 off 48 balls) has recorded his highest score in England in T20Is. His second fifty vs England is his eleventh in T20Is. The said fifty is his third in 19 games as captain.

# McCullum's 13 innings of fifty-plus, including two hundreds, is a record in T20Is.

# James Franklin's first duck vs England is his second in T20Is - his first was vs South Africa at Durban on December 21, 2012.

# Rutherford and Brendon McCullum put on 114 for the second wicket - New Zealand's highest partnership for any wicket vs England in T20Is, outstripping the 75 for the first wicket between Martin Guptill and Rutherford at Hamilton on February 12, 2013.

# The above partnership is a record for New Zealand for the second wicket iT20Is, eclipsing the 94 between Franklin and Brendon McCullum vs Bangladesh at Pallekele on September 21, 2012.

# Luke Wright (2/31) has produced his best bowling performance in England in T20Is.

# Wright's second fifty (52 off 34 balls) vs New Zealand is his fourth in T20Is. For the first time in a T20I, he has registered a fifty and claimed two wickets.

Comments
Topics mentioned in this article
England Cricket Team Cricket Jeetan Patel Kevin Pietersen James Franklin Brendon McCullum New Zealand Cricket Team Hamish Rutherford Bradley Watling
Get the latest updates on IPL Auction 2023 and check out  IPL 2023 and Live Cricket Score. Like us on Facebook or follow us on Twitter for more sports updates. You can also download the NDTV Cricket app for Android or iOS.