It was not easy getting used to the fact I wasn't world champion: Viswanathan Anand

Former chess world champion Viswanathan Anand said he suffered from 'withdrawal symptom' after losing his crown to Magnus Carlsen last year. He tells NDTV how his son helped him recover from depressing moments.

Former chess world champion Viswanathan Anand confessed to NDTV on Wednesday that he suffered from 'withdrawal symptom' after losing his crown to Norway's Magnus Carlsen in Chennai last December. "It wasn't easy getting used to the fact that I was not the world champion any more. The withdrawal symptom was hard," Anand said from Chennai. 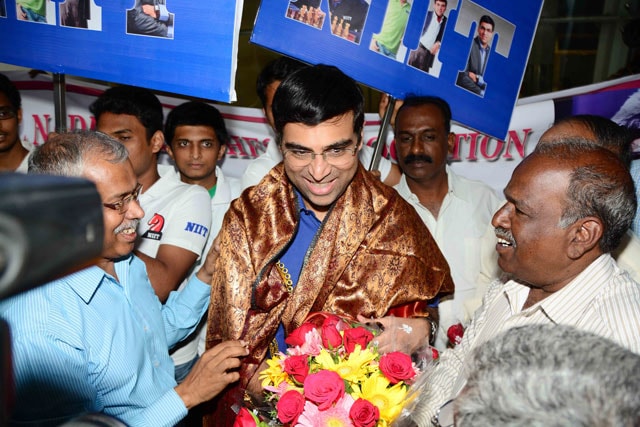 Anand have won himself the right to contest Carlsen once again. Last week in Khanty Mansiysk, Russia, five-time world champion Anand sealed the Candidates tournament title with an effortless draw with Peter Svidler of Russia in the 14th and final round. Having won one of the strongest tournaments of recent times with one round to spare, Anand just didn't want anything to go wrong and went for the draw with white pieces that was for the taking. The Indian ace thus officially earned the right to a rematch with Carlsen along with the winner's purse of 13,5000 Euros.

Anand ended the tournament on 8.5 points, a full point ahead of Karjakin, who finished a creditable second after a bad start. Kramnik, Andreikin and Mamedyarov finished joint third on seven points apiece while Aronian and Svidler ended joint sixth on 6.5 points in all. Topalov ended last scoring six in all.

The bidding for Anand-Carlsen match is now open and FIDE, the apex chess body will decide the awarding of this match after receiving all the bids by April 30 this year. The match will be held from November 5-25.

Anand will now take a break and spend more time with his family and especially, his son. In the interview with NDTV, the affable champion remembered how playing with his son took away the low moments of his amazing career. Anand said the win at the Candidates has "given his confidence back and is now high on morale."

The Super Grandmaster admitted that he was overtaken by emotions after losing to Carlsen. "I needed a few days alone to let my head settle down. After a week or so, I said I will play on," Anand said, explaining why he refused to quit after surrendering the world crown to Carlsen.