Grandmaster Abhijeet Gupta won a silver by pocketing seven points out of nine games while Tania Sachdev turned out to be the best woman performer for India with a bronze medal in the Chess Olympiad, that concluded here on Sunday. 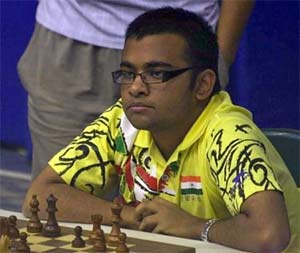 Grandmaster Abhijeet Gupta won a silver by pocketing seven points out of nine games while Tania Sachdev turned out to be the best woman performer for India with a bronze medal in the Chess Olympiad, that concluded here on Sunday.

The Indian women team dished out its best-ever performance with a fourth place finish after defeating France 2.5-1.5 in the final round.

D Harika and Soumya Swaminathan won on the first and fourth board while Tania played out a draw on the second to ensure and Indian victory by a minimal margin even as Mary Ann Gomes suffered a reversal.

It was a very dismal show by the Indian men who finished 35th in overall standings starting as the 13th seed.

Tania bagged nine points out of a possible 11 and was second best on the third board. The individual gold for this board was won by Nadezhda Kosintseva of Russia.

"This has been a dream. We were the sixth seeds so I knew we had a fair chance. We came very close to the medal but no regrets, we lost only to the two best teams and personally, after a quite some time, I am truly happy with my performance," Tania told PTI.

Gupta scored an excellent seven points out of nine games and had the second best performance on the fourth board behind Vladislav Tkachiev of France.

Bhilwara-based Abhijeet was pragmatic when asked about personal results.

"In a team event this was not the only thing I was looking for, we did not do too well as a team, simply too many draws conceded. Personally it's a milestone, I was playing decently and was lucky in patches, happens all the time," he said.

Abhijeet, who was rested, however could not help the team salvage some pride against Azerbaijan as Indian men suffered their first defeat in the Olympiad by a minimal margin. P Harikrishna lost to Shakhriyar Mamedyarov while the other three boards ended in draws.

Meanwhile, Armenia won the gold medal in the open section after beating Hungary 2.5-1.5 in the final round. Russia matched Armenia on 19 Match points after an easy 3-1 victory against Germany but Armenia had the better tiebreak.

The Russian men had to be content with the silver while Ukraine got the bronze defeating overnight joint leader China 3-1.

Russian women won the women's section with a 4-0 whitewash of Kazakh eves in the final round here. With 19 match points, Russia edged China for the gold medal with better tiebreak. Ukrainian eves got the Bronze medal in this section.