The Australian club registered an all-round performance to remain unbeaten in the tournament. 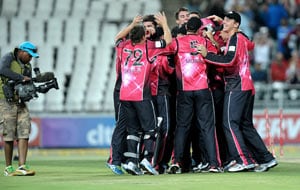 Sydney Sixers won the Champions League Twenty20 2012 with ease, walking to a 10-wicket victory over Highveld Lions in the final at The Wanderers in Johannesburg on Sunday (October 28). It was a one-sided encounter, and the Sydney bowlers will take due credit for the win, restricting the Lions to 121, before the batsmen completed the chase with aplomb.

Despite the small target, Michael Lumb was in no mood to wait, scoring an unbeaten half-century at a strike-rate over 195. He was well assisted by Brad Haddin, his captain, who scored an assured 38 In the course of his 82, Lumb, after scoring 82 off 42, became the highest rungetter of the tournament, going past Gulam Bodi, Neil McKenzie and Jacques Rudolph. The strong opening partnership ensured that the Sixers got to their target with 45 balls to spare, leaving the Lions' supporters thoroughly disappointed.

Having opted to field, Haddin's decision to open with spinners proved a masterstroke. It took the Lions by surprise and had it not been for a fighting performance from the middle-order, led by a half-century from Jean Symes, they would have been far from the total of 121 they eventually made.

Nathan McCullum opened the bowling, and got the breakthrough with the fourth ball of day. Bodi's slog-sweep was admirably taken by Ben Rohrer at deep midwicket. After Steve O'Keefe's next over, Haddin decided to bring Josh Hazlewood into the attack, rather than continue with McCullum, and the move reaped more rewards with Hazlewood scalping two wickets in an same over. Both Quinton de Kock (1) and Neil McKenzie (0) attempted to loft over the on-side but were only successful in gifting their wickets. Alviro Petersen (1) fell in the very next over, to O'Keefe, leaving Sydney struggling at nine for four.

With Symes in the middle, the Lions set about their fight back. A fifth-wicket stand of 23 between Symes and Sohail Tanvir took them up to 32. However, McCullum was brought back into the attack and had the desired effect, trapping Tanvir (11) leg before wicket. The wicket didn't arrest the comeback though, with Thami Tsolekile, walking in at No.7, assisting Symes in putting up a valuable 41-run stand for sixth wicket. Having made 20 off 19, inclusive of two sixes, Tsolekile became McCullum's third wicket, slogging straight to O'Keefe at short midwicket.

Dwaine Pretorius continued assisting Symes and the two put on 38 for the seventh wicket, taking the Lions past the 100-run mark. The stand ended when Pretorius was run out, having smashed 21 off 13. Symes fell in the very next over, edging a full delivery straight to Haddin, leaving the Lions at 112 for eight, with two overs to go. Chris Morris and Aaron Phangiso pushed the score to 121.

That, however, was never enough.