Morris doffed his hat at Dhoni and talked about his leadership qualities that ultimately made India the world champions in one-day international cricket. 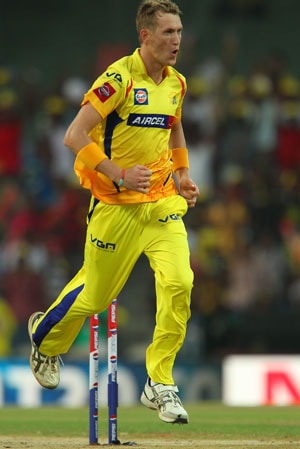 "Mahendra Singh Dhoni is a role model to many cricketers around the world" - the expression made by South African pacer Chris Morris appropriately summed up the magic of India's cricket captain.

Morris doffed his hat at Dhoni and talked about his leadership qualities that ultimately made India the world champions in one-day international cricket.

"Dhoni is a role model to many cricketers around the world. The reason India are the world champions is because of the quality of players they have especially Dhoni," said Morris.

The lanky South African pacer, who is plying his trade in the Champions League for the two-time IPL champions Chennai Super Kings, said that they would like to end their league engagements as the table-toppers and play the semifinal in Delhi on Saturday under the leadership of their inspirational skipper Dhoni.

"That was our goal when we got here, to top our group, but we want to finish the group stages well too," he said.

Chennai will be playing a resurgent Trinidad and Tobago in their final league game at the Feroze Shah Kotla stadium here tomorrow.

The Caribbean side, which finished runners up in 2009, faces their toughest test in the league so far against CSK, who have already sealed a spot in the final four.

"We have a tough game coming up and it's important to get the job done well. We have achieved our first goal of qualifying for the semifinals and now we would look to top the group. Our aim would be to finish the group stage with a win," he said.

Chennai's strength has been their batting, comprising of the ever-reliable pair of Suresh Raina and Mike Hussey, Dwayne Bravo, S Badrinath and not to forget Dhoni, who had blasted his way to a 19-ball 63 against Sunrisers Hyderabad.

The bowlers have also complimented the efforts of their bowlers with R Ashwin, Jason Holder, Mohit Sharma, Albie Morkel and Bravo chipping in with useful spells.

The only concern for them could be the indifferent form of Ravindra Jadeja.

For Morris, he has remained an integral part of the team but in the ongoing edition, he hardly made an impression in the limited opportunities he got.

"I don't think it is (a concern). Jadeja is an outstanding player. I'd like to think that we haven't needed him so far. So as long as we don't need him, happy days," he said.

Comments
Topics mentioned in this article
Cricket Chris Morris MS Dhoni Suresh Raina Champions League Twenty20 2011 Davy Jacobs Champions League Twenty20 2012
Get the latest updates on ICC T20 Worldcup 2022 and CWG 2022 check out the Schedule, Live Score and Medals Tally. Like us on Facebook or follow us on Twitter for more sports updates. You can also download the NDTV Cricket app for Android or iOS.