Titans beat Sunrisers Hyderabad by 8 wickets on Saturday to register their biggest win in terms of wickets in Champions League Twenty20. 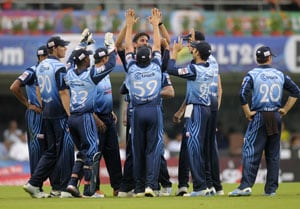 Titans beat Sunrisers Hyderabad by 8 wickets on Saturday to register their biggest win in terms of wickets in Champions League Twenty20. Here are some other highlights from the Group B game at Ranchi:

# Sunrisers Hyderabad have suffered their biggest defeat in the CLT20, eclipsing the five-wicket loss to Otago at Mohali on September 20, 2013.

# Shikhar Dhawan and Parthiv Patel put on 62 for the first wicket - the pair became the first to register four opening stands of 50-plus in the present competition.

# Dhawan (37 off 21 balls) became the first batsman to manage 250 runs in the present competition at an average of 41.66, including two fifties, in six innings.

# Henry Davids became the first Titans' player to manage 300 runs in the CLT20 - his tally being 317 in seven innings at an average of 52.83.Â  He is the only one to register four fifties for Titans in the CLT20.

# Henry earned a well-deserved Man of the Match award.

# Jacques Rudolph took his aggregate to 243 (ave.48.60) in eight matches, including two fifties, for Titans in the CLT20.

# The aforesaid partnership is the first century stand by any pair for any wicket vs Sunrisers Hyderabad in the CLT20.