A semi-final berth seems like distant possibility for Auckland Aces but the New Zealand side will look to keep itself in the calculations by taming the demoralised Perth Scorchers when the two teams lock horns in their final round-robin Champions League Twenty20 match on Tuesday. 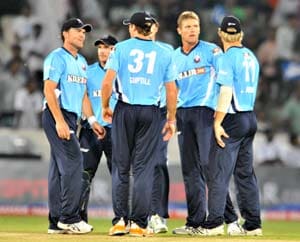 A semi-final berth seems like distant possibility for Auckland Aces but the New Zealand side will look to keep itself in the calculations by taming the demoralised Perth Scorchers when the two teams lock horns in their final round-robin Champions League Twenty20 match on Tuesday.

Auckland had not put a foot wrong in the tournament till they faced the Titans. The New Zealand side started its campaign on a rampaging note winning both its qualifiers comprehensively to make the main draw from pool 1.

They also started the Group A journey with a thumping victory over IPL champions Kolkata Knight Riders but the Titans stopped their juggernaut with a 59-run victory and then luck also deserted them as rain washed out their match against the Delhi Daredevils without a ball being bowled.

Auckland are now now placed fourth in Group A with six points. Delhi and Titans with 10 and 8 points are already the front-runners to seal a semi-final berth.

Gareth Hopkins's side will look to bring itself into contention with a big victory on Tuesday and also hope that Delhi beat Titans comprehensively in the next match to salvage its hopes of a last-minute entry to the semis.

The Aces have so far rode on the all-round performance of former Pakistani player Azhar Mahmood and their opening duo of Martin Guptill and Lou Vincent.

The day they failed, Auckland found themselves in the lurch and the onus would be on them to once again come to their team's rescue on Tuesday.

Kyle Mills and Michael Bates will shoulder the responsibility of delivering with the ball.

Perth Scorchers, on the other hand, have an experienced team with many international players but have failed to make a mark in the tournament.

They started with a loss against Titans and were left disappointed after heavens opened in the second game against Kolkata and last night's three-wicket loss to Delhi was the final nail in the coffin for them.

The only motivation for the Australian side now will be to spoil whatever chances Auckland have in the tournament with a victory tomorrow and head back home on a positive note.

Comments
Topics mentioned in this article
Cricket AUC Champions League Twenty20 2011 Champions League Twenty20 2012
Get the latest updates on IPL 2020, check out the IPL Schedule for 2020 and Indian Premier League (IPL) Cricket live score . Like us on Facebook or follow us on Twitter for more sports updates. You can also download the NDTV Cricket app for Android or iOS.