Jacques Rudolph and Farhaan Behardien came up with brilliant knocks to power Nashua Titans to the top of Group A as they beat Auckland Aces by 59 runs in the Champions League T20 on Wednesday. 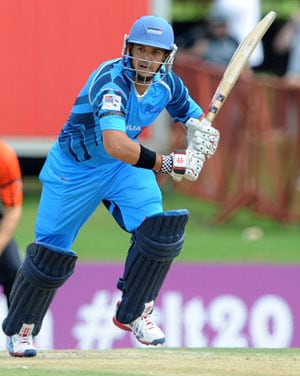 Opener Jacques Rudolph led the Titans innings, blasting a brisk 56-ball 63 to help them post a challenging 172 for four after Auckland won the toss and decided to field at Kingsmead.

The Titans then returned to bowl out Auckland for 113 in 18.1 overs to inch towards a semifinal berth. They will next take on IPL champions Kolkata Knight Riders at Cape Town on Sunday.

Auckland were 58 for six in 8.3 overs but a 45-run partnership for the last wicket between Andre Adams (30) and Micheal Bates (14) delayed the inevitable.

For Titans, Ethy Mbhalati and Alfonso Thomas took three wickets each giving away 26 and 18 runs respectively, while Cornelius de Villiers, Eden Link and RE van der Merwe grabbed one apiece.

Earlier, Rudolph blasted seven fours in his 56-ball innings and forged a 74-run opening partnership with Henry Davids (36), to set the foundation for the Titans.

He anchored the innings, adding 26 and 33 runs for the second and third wickets with M Van Jaarsveld (13) and Farhaan Behardien (48), respectively.

Farhaan provided the late charge to take the Titans across the 150-mark. His 23-ball innings was studded with one four and three sixes.

For Auckland Kyle Mills, Michael Bates and Azhar Mahmood took one wicket each.

Rudolph and Davids gave Titans a blistering start as they picked up boundaries at will from the start.

Rudolph started the proceedings, sending Mills across the cover region in the second ball itself. He repeated the treatment to Bates in the next over, while David also joined in with a drive past extra cover. The duo picked up two more fours off Mills in his second over and then blasted Azhar for another at the extra cover area.

Andre Adams was then introduced into the attack and Rudolph soon dismissed him over midoff. In his next over, David sent him over square-leg to pick up the first six for the Titans before picking up a four at the third man area.

In the ninth over, Azhar broke the partnership, dismissing Davids, who, in his pursuit to work a yorker to third man ended up being bowled.

Rudolph tried to keep the scoreboard ticking along with new batsmen Jaarsveld, who brought up the hundred for Titans. But in the next ball, he failed to do away with a slower delivery from Mills and holed out at deep midwicket.

Farhaan joined hands with Rudolph and picked up ones and twos besides the occasional boundary. The opener was dismissed by Bates in the 18th over when Andre pulled off a good catch at extra cover.

In the 19th over, Farhaan stepped on the gas, blasting Mills for consecutive sixes and a four to take Titans past the 150. He finished the innings in style, picking up another six off the last ball.