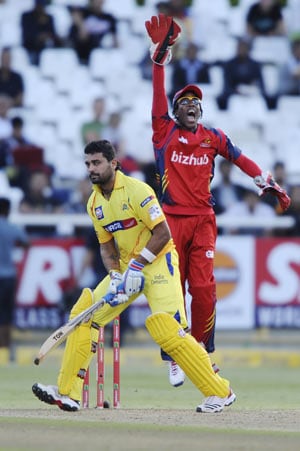 Chennai Super Kings' chances for a semifinal berth in the Champions League Twenty20 suffered a blow as they slumped to their second consecutive defeat in the tournament with a six-wicket loss at the hands of Highveld Lions here on Tuesday.

After being sent into bat, Chennai posted a challenging 158 for six with captain Mahendra Singh Dhoni top-scoring with 34 but the Lions chased down the target with three balls to spare in a thrilling Group B match that went down the wire at the Newlands.

Opener Gulam Bodi smashed a 46-ball 64 to play a big role in the Lions' win. The local side now are in a very good position to make it to the semifinals having beaten defending champions Mumbai Indians in their opening match on October 14.

Chennai, who had lost to Sydney Sixers in their opening match on October 14, squandered a sensational start in their defence of 158.

Pacer Doug Bollinger (2/18)got two quick wickets early on to reduce the Lions to eight runs for two in the third over but Chennai allowed the local side to wriggle out of the tight spot and then to eventually win the match.

Chennai will now have to win both their remaining matches to have any chance of making it to the semifinals.

Bodi and Neil McKenzie (32) shared a 93-run stand for the third wicket from 9.5 overs to turn the tide in favour of the Lions.

For Chennai, Ravichandran Ashwin and Albie Morkel took a wicket each, besides the two wickets by Bollinger for 18 runs.