Delhi's long break for the second match in the tournament was made longer when heavy downpour had the final say in the scheduled match against Auckland. 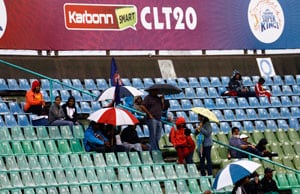 The Champions League Twenty20 match between Delhi Daredevils and Auckland Aces was abandoned due to incessant rains, here on Friday.

The match officials decided to call off the game an hour before the cut-off time since rain continued to lash the ground for about two hours.

All of the last three evening games have now been abandoned due to inclement weather. Kolkata Knight Riders and Mumbai Indians had to share points with rivals as their matches could not be completed due to rain.

It was Delhi Daredevils' second match in the tournament, having won the opener against Kolkata on October 13. They remain on second in the points table in Group A with six points and a healthy net run-rate of +2.60.

Titans are leading the table with eight points, having won both the matches they have played.

Delhi next play Perth Scorchers on Sunday in Cape Town. It means the players of the side will play a match after a gap of eight days.