Dwayne Smith slammed an unbeaten half-century while Kieron Pollard scored a quick-fire 31 to help Mumbai Indians register a comfortable victory and also stay in hunt for a semifinal spot.

Mumbai Indians beat Highveld Lions in a Group A encounter of the Champions League Twenty20 to remain in hunt for last four. Catch all the highlights here: (Scorecard | Commentary)

Man of the Match Dwayne Smith: I just wanted to spend time in the middle. I knew that I can score if I stay there. It is about staying positive and I am happy that it worked well for me.

Rohit Sharma: I have been working hard on my fitness. The wicket was very fresh and we wanted to exploit the conditions. Credit to all the bowlers. They did a fine job and it is not easy to restrict a side like the Lions under 140. The batsmen then played well to chase it down. (Mitchell) Johnson bowled really quick and it is good to see him bowl so well. There was some pressure on us to perform here. But we just wanted to enjoy ourselves and we did well.

Alviro Petersen: I thought they played well to limit us probably around 20 runs short. But I am pretty happy with the way the boys played today though. After 6 overs we were in a good position, but they bowled well and put us under pressure. It was a sort of a wicket that we are used to back home, but it was just a touch on the slower side.

23:30 (IST): That's it! Mumbai Indians cruise to a comfortable seven-wicket victory against South African side Highveld Lions in Jaipur. Dwayne Smith scored and unbeaten 63 while Kieron Pollard slammed a fiery 31 off 20 balls. 22:50(IST): Dwayne Smith (38 off 26) holding it together and moving the scoreboard along for Mumbai Indians. Rohit Sharma (17 off 13) too has had a positive beginning. After 11 overs, Mumbai 76/2, need another 65 from 54 balls. Meanwhile an altercation between Rohit and Lions' pacer Hardus Viljoen. The two inadvertently clash as Rohit was running down the wicket. Unnecessary provocation by Mumbai skipper it seems.

WICKET! Soft dismissal for Dinesh Karthik. Imran Tahir gets his man in the very first over of his. Karthik tried to cut it but gives a simple catch to Alviro Petersen at backward point. He scored 13. Mumbai 47/2 in 8 overs, need 94 more to win as skipper Rohit Sharma comes in and Lions bring on their second spinner Aaron Phangiso.

22:35(IST): Dwayne Smith opens up in the 7th over of the innings bowled by Lonwabo Tsotsobe, bludgeons a couple of sixes - one over mid-on and one over mid-wicket. 16 runs came from the over. Smith batting on 25 off 18 even as Dinesh Karthik finds his feet in the middle on 12 off 16. Mumbai Indians 45/1 after 7 overs. 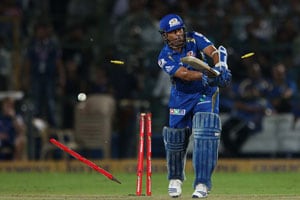 22:16 (IST): WICKET! Sachin Tendulkar departs. Sohail Tanvir bowls a slower delivery and Sachin moves across to play in on the on side. He gets into the shot early and misses the ball. Ball knocks off the off stump. Mumbai Indian 15/1 (2.5 overs).

21:58 (IST): Mumbai Indians have restricted Highveld Lions to 140/5. Pragyan Ojha bagged two wickets while Harbhajan Singh, Rishi Dhawan and Mitchell Johnson picked up one wicket apiece. Skipper Alviro Petersen top scored with 35 not not while Dwaine Pretorius remained unbeaten on 31. The duo was involved in a 59-run partnership off 40 balls for the sixth wicket. 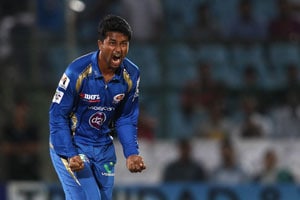 21:15 (IST): WICKET! Jean Symes is out. Like Harbhajan Singh, Pragyan Ojha too strikes in his first over. Symes was looking to over mid wicket, but misses line this time and loses his leg stump. Highveld Lions 71/4 (11.3 overs) vs Mumbai Indians.

21:10 (IST): WICKET! Neil McKenzie out after smashing Rishi Dhawan for the first six of Highveld Lions' innings over mid wicket. Dhawan bowls a pitched up delivery which nips back in. McKenzie was looking to drive it but leaves a big gap between bat and pad. Off stump gone. Highveld Lions 62/3 (10 overs) vs Mumbai Indians.

20:55 (IST): WICKET! Harbajan Singh strikes in his first over and Quinton de Kock has to depart. De Kock was looking to play it on the on side but he missed it completely and was struck in front of middle stump. Highveld Lions 41/2 (6.4 overs) vs Mumbai Indians. 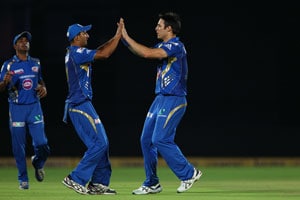 20:43 (IST): WICKET! Right hander Rassie van der Dussen (13 off 15) is out, caught by Rishi Dhawan off Mitchell Johnson. He went for a put but the ball took the leading edge and it lobbed to Dhawan at square leg. Lions lose their first wicket.

20:36 (IST): First set of fours for the Lions since resumption of play - Rassie van der Dussen drives Mitchell Johnson for four through the covers in the third over. Next over, Quinton de Kock flicks Nathan Coulter-Nile for four past straight mid-wicket. Lions 21/0 after 3.4 overs.

20:07 (IST): Play has been stopped due technical fault with one of the light towers. Highveld Lions 5/0 (0.5 overs) vs Mumbai Indians. 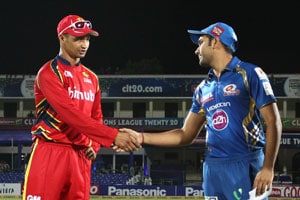 19:15 (IST): One of the strategies that could demand a rethink is including both Harbhajan Singh and Pragyan Ojha in the playing XI, especially if there's another green-tinged pitch. Mumbai have the option of an extra pacer in Abu Nechim Ahmed, to go with Mitchell Johnson, Nathan Coulter-Nile and Rishi Dhawan.

19:00 (IST): Rohit Sharma, the Mumbai captain, said his side "knows the strengths and weaknesses" of the Lions since they had played them before, but stressed that rather than focusing on the opposition, Mumbai were looking to up their own game and strategy.

18:30 (IST): In the CLT20, the Lions have got the better of Mumbai on two previous occasions, winning by nine runs in 2010 and by eight wickets in 2012. A common factor in the wins was Neil McKenzie, the veteran batsman, who hit quickfire half-centuries in both matches. McKenzie didn't play in the Lions 30-run loss against Rajasthan on Wednesday, but pacer Sohail Tanvir was hopeful he would be fit in time for the Mumbai clash.

18:15 (IST): Highveld Lions' seamer Sohail Tanvir cited lack of experience as the reason for his team's defeat at the hands of Rajasthan Royals and said the batsmen simply failed make any impact. (Read more) 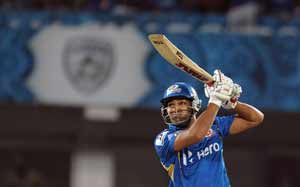 Two teams that came into the Champions League Twenty20 2013 with high expectations and as the domestic champions of their countries find themselves in a do-or-die situation ahead of their clash today. Mumbai Indians were scheduled to face Highveld Lions in Ahmedabad, but the relentless rains in that city meant that the clash will now take place at the Sawai Mansingh Stadium in Jaipur.

Both sides have been on the receiving end of a washout and a loss against Rajasthan Royals, and have only two points with two matches in hand in Group A. With Rajasthan and Otago Volts pulling away from the pack, the losing side will effectively be out of the running for a semifinal spot.