Vijender Singh will be returning to the boxing ring after over a year due to the coronavirus pandemic. 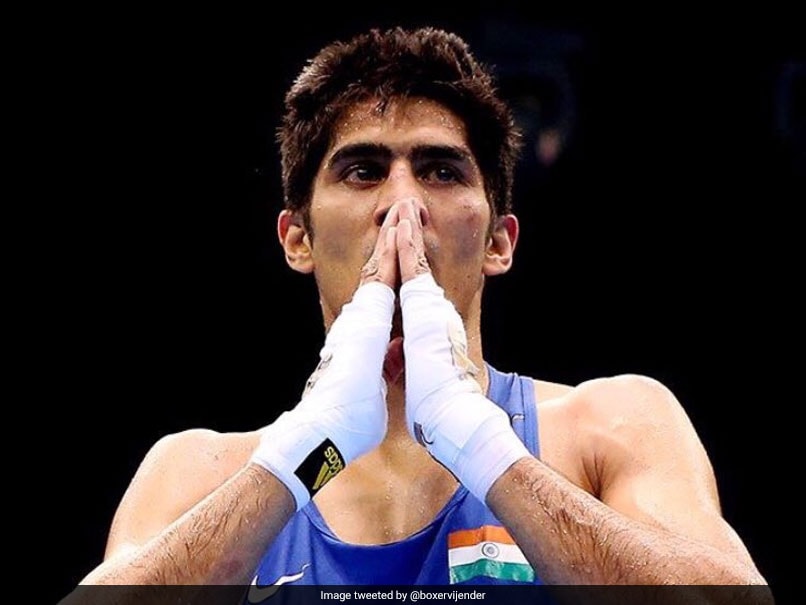 Vijender Singh will be looking to keep up his unbeaten professional record.© Twitter

India's professional boxing star Vijender Singh will fight Russia's Artysh Lopsan in his return to the ring after over a year disrupted by COVID-19 during which he relied on his amateur contemporary and former Commonwealth Games bronze-medallist Jai Bhagwan for training assistance. Vijender and Losan will square off on March 19 in a super middle-weight (76kg) showdown on the rooftop deck of the Majestic Pride Casino Ship in Panaji, Goa. Lopsan's name was revealed at a press conference here.

"It wasn't the easiest year and initially it took a while for the body to respond. But the last two months have been fabulous for me. Jai Bhagwan (2010 CWG bronze-medallist) helped me with my training here in Gurgaon," Vijender told PTI on how he geared up for his return.

"I was also in touch with (his Manchester-based British trainer) Lee Beard for some online help," he added.

The 26-year-old Losan has fought six pro bouts, claiming four victories, including two knockouts. His last contest was in December 2020 against compatriot Yusup Magomedbekov, which he won via Technical Knockout.

Vijender, on the other hand, is unbeaten throughout his professional career. His record of 12-0 includes eight knockouts. The 2008 Beijing Olympics bronze-medallist defeated Ghana's former Commonwealth champion Charles Adamu in Dubai to claim his 12th successive win in November 2019.

"Lee couldn't be here because of COVID restrictions but he has been supportive and has been there online whenever I have needed advice. Jai, you can say, is my coach right now," Vijender said about his longtime friend with whom he competed in the 2010 CWG in Delhi.

Lee has been Vijender's trainer ever since he took the professional plunge in 2015.

Jai is a serving police officer in Haryana and took leave to assist Vijender. He is a two-time Asian championship bronze-winner and has competed alongside Vijender in several international and national amateur events.

Vijender said the lockdown posed a few challenges with regards to finding sparring partners but in the last few months, he has got what he needed to be ready for the comeback. He is eyeing another knockout against the less experienced Russian.

"I didn't face any trouble finding sparring partners to prepare myself. The facilities were also very accessible thanks to my promoters (IOS Boxing Promotions). So I am in a good shape and raring to go," said the 35-year-old, who plans to compete in at least two more fights this year.

Lopsan, on the other hand, is aiming to end the Indian's unbeaten run during which he picked up the WBO Asia Pacific and Oriental Super Middleweight titles.

"Vijender is a good fighter but I'm here to end his unbeaten streak. What better way to end his streak than knocking him down in front of his audience. I've trained hard for this fight and I'm rearing to go," he said.

"(It) will be the co-main event for the night followed by Vijender's much-awaited return to the ring," said IOS Boxing Promotions.

There will be six under-card fights as well.

"It is going to be a big fight in Goa. Vijender has the experience and unbeaten streak while Lopsan also has a good record under his belt. I'm expecting a really good fight between the two and fans will be able to witness something incredible," said IOS Boxing Promotions'' Neerav Tomar said.

Owing to social distancing guidelines, only 50 per cent of the general tickets and a limited 150 high-end tickets have been put on sale.

Comments
Topics mentioned in this article
Vijender Singh Boxing
Get the latest updates on Fifa Worldcup 2022 and check out  Fifa World Cup Schedule, Stats and Live Cricket Score. Like us on Facebook or follow us on Twitter for more sports updates. You can also download the NDTV Cricket app for Android or iOS.