Vijender Singh had said that Pakistan-origin British pugilist Amir Khan has been playing with "kids" so far. 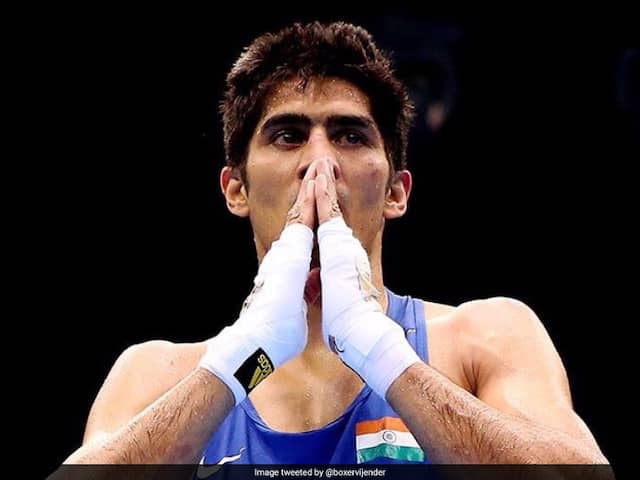 Pugilists Neeraj Goyat and Vikas Krishan have challenged Vijender Singh for a fight in November after the star boxer called Neeraj a "kid". After registering his 11th consecutive victory in the professional circuit by outsmarting American Mike Snider in New Jersey recently, Vijender had said that Pakistan-origin British pugilist Amir Khan has been playing with "kids" so far. Amir had raised questions over Vijender's abilities and skills when the Indian boxer started his professional career.

Speaking on the sidelines of an event where he was felicitated for his recent win in the US, Vijender said: "I am always ready, you should ask him (Amir). He has been playing with "kids" all these time. He was supposed to fight Neeraj Goyat, but our boxer got injured. Neeraj is junior to us. After that, he fought with some Australian boxer and won. As I said earlier, I maintain my stand that I am any day ready to take him on... I just want to know when he will be ready."

Meanwhile, Vijender's "kid" comment did not go down with Neeraj, who tweeted: "Calling me kid @boxervijender. I'm the only Indian boxer who has defeated a world champion in his own country #canxu #china. I want you to face @officialvkyadav (Vikas Krishan) in me and @amirkingkhan undercard in november this year. Are you ready?"

Neeraj has also vowed to challenge Amir after recovering from the injuries he sustained in an accident that ruled him out of the big showdown against the British star earlier this month.

Amir kept up his aim for a massive showdown with the legendary Manny Pacquiao by blowing away Billy Dib in Jeddah earlier this month.